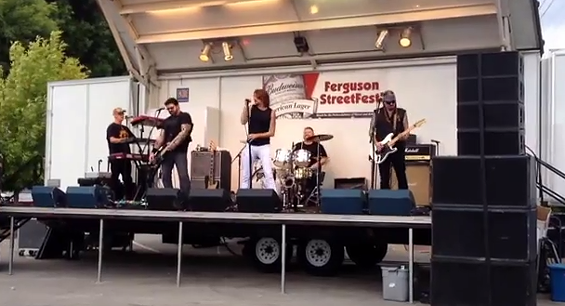 Ferguson city officials have decided to postpone StreetFest, a beloved fifteen-year-old festival in the city's historic CityWalk district, and residents are blaming disruptive and disrespectful protesters.

The music and food festival was supposed to happen this weekend and feature the first-ever Ferguson StreetFest talent show, a home-brewing expo, a washer tournament, pony rides and, of course, the popular Manly Man High Heel Keg Relay, where men race each other while holding kegs of beer and wearing pumps.

Ferguson city spokesman Devin James confirmed to Daily RFT that the festival is postponed, and said the city will release more information soon. We'll update the story when we hear more.

Update, 11:19 a.m.: StreetFest is postponed indefinitely due to safety concerns, the city says.

Toni Roper, the marketing and events coordinator, says in the city's statement: "Obviously, the timing for this isn't ideal, but the safety of our residents, vendors and all participants is our main concern. We want to thank everyone for the outpouring of support that we have received and can't wait to see everyone again soon."

Brian Fletcher, a former mayor of Ferguson and leader of the "I Heart Ferguson" campaign, said he completely disagrees with the city's decision and called on officials to reinstate the community festival, even if it means ending the festivities earlier in the night.

"Our city and our citizens and businesses must not be held hostage," Fletcher wrote on the "I Heart Ferguson" website. "Residents have been patient, courteous, understanding for five weeks. Ferguson has been maligned, ridiculed and called a 'suburban ghetto,' especially by the national media. That ends today."

Fletcher said he blames "illegal protesters," not non-violent demonstrators, for causing the safety concerns that led to the festival's postponement.

"The actions of the protesters are costing our businesses their livelihood and our city taxes. This is their goal," he writes. "They disrupt the peace of restaurants, the Farmer's Market and traffic. They are breaking the law."

Protesters marching and chanting at Ferguson's popular weekly farmers' market has been a sore spot for residents, many of whom mentioned the disruptions at Monday night's town-hall meetings, which were closed to media and non-residents.

Fletcher offers another example of a time when "illegal protesters" caused problems for Ferguson residents:

This past Saturday, a very well known female co-owner of multiple Ferguson businesses was blocked on S. Florissant road. Her vehicle was surrounded by the so called peaceful protectors taunting, cursing, calling her a white bit**. She was brought to tears. They stood in middle of the street, surrounding her vehicle, not allowing her to move. For 25 minutes she was held against her wishes as a hostage, literally kidnapped. The police were down the street a bit further handling another similar incident were a motorist supposedly bumped a protestor who was in the street blocking his path. The mob then pounded on the vehicle causing $1500 in damage (according to a local auto firm). I ask you again, is this peaceful?

Fletcher says he's calling on Ferguson residents to tell the city council not to postpone or cancel StreetFest. Instead, Fletcher suggests the festival could end at 6 p.m. instead of 10:30 p.m. so there is "no darkness of night cover for [protesters'] illegal actions."

Fletcher also asked the council to designate one entry/exit point for the festival and to station plainclothes police officers for security.