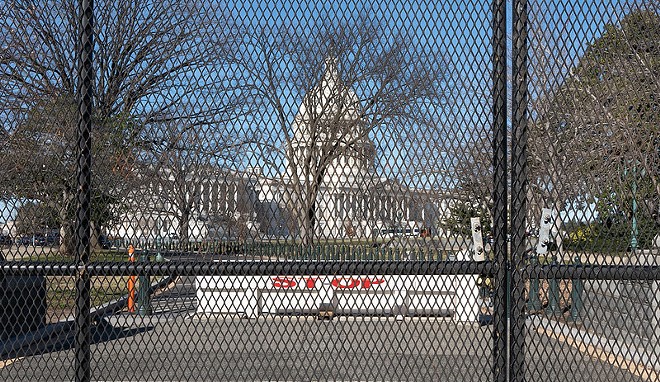 VICTORIA PICKERING/FLICKR
The U.S. Capitol, secured in the weeks after the siege.


A Festus man is the latest Missourian to be charged in the January 6 riots at the U.S. Capitol.

Joshua David Dressel, 31, is facing four federal misdemeanors and is accused of joining the mob that stormed the Capitol. He is the eleventh person from Missouri charged in connection with the siege that was carried out by followers of Donald Trump in hopes of overturning the presidential election after he lost to now-President Joe Biden.

That day, swarms of people attacked and overwhelmed Capitol police and rushed inside the building — where some trashed legislators' offices and called out plans hang House Speaker Nancy Pelosi and former Vice President Mike Pence, whom they blamed for Trump's downfall.

Dressel, who had a small tree-trimming service in Jefferson County, appeared this afternoon by video conference in front U.S. District Judge Noelle Collins. Like his fellow Missouri defendants, his initial appearances are being handled locally in St. Louis, but the case originates with federal prosecutors in Washington, D.C.

Today's court appearance was routine. Dressel gave his name but said little else, and a federal prosecutor listed the charges, which include:

- Disorderly and disruptive conduct in a restricted building or grounds

- Parading, demonstrating or picketing in a Capitol building

So far, more than 530 people have been charged in the siege. Each of the counts against Dressel carry a maximum punishment of a year in prison and a fine of $100,000.

He was released on bond, which has been standard in the majority of the cases.