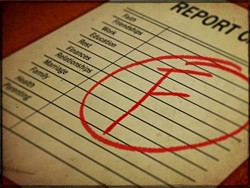 The state earned an "F" for tobacco prevention and control (spending just $58,693 last year to prevent tobacco use statewide); an "F" for smoke-free air (with legislators refusing to pass a statewide smoking ban and prohibitions in St. Louis and St. Louis County allowing people to continue to light up in bars and casinos); an "F" for its 17-cent per pack cigarette tax (the lowest in the nation) and an "F" for it cessation efforts with Missouri spending 53 cents per smoker when the CDC recommends at least $10.53 per smoker.

For those keeping score at home, that's an "F" in all four categories, earning Missouri the worst marks possible. Yet just like those New Year's resolutions to quit smoking, hope springs eternal in Jefferson City. And in the past six weeks, the Secretary of State's Office has approved wording for some 14 different ballot initiatives that -- if they get enough signatures by May -- could land on the November ballot.

Most of the initiatives would allow cities and counties to set tobacco taxes as they see fit without assigning a dollar value. One initiative, though, is more specific. It would increase the state tax by $0.0365 per cigarette. That adds up to 73 cents per pack, which, coupled with the current 17-cents-per-pack tax, would raise the state tariff to 90 cents per pack.

That's still well below the national average of $1.46 per pack and 8 cents cheaper than smokes in Illinois. The initiative would also raise taxes on other forms of tobacco and could bring in between $283 million and $423 million annually to the state coffers.

Collection from the tax would be earmarked solely to reduce and prevent tobacco use and fund public schools and universities. The first part makes the most sense, especially seeing how nearly 10,000 Missourians die from tobacco-related diseases each year and the state spends about $2 billion annually to treat smoking-related illness.

It's worth noting that Missouri voters rejected similar ballot proposals in 2002 and 2006 that would have raised the state's cigarette tax. Could 2012 be the year those same voters finally break the habit and move from the back of the class?