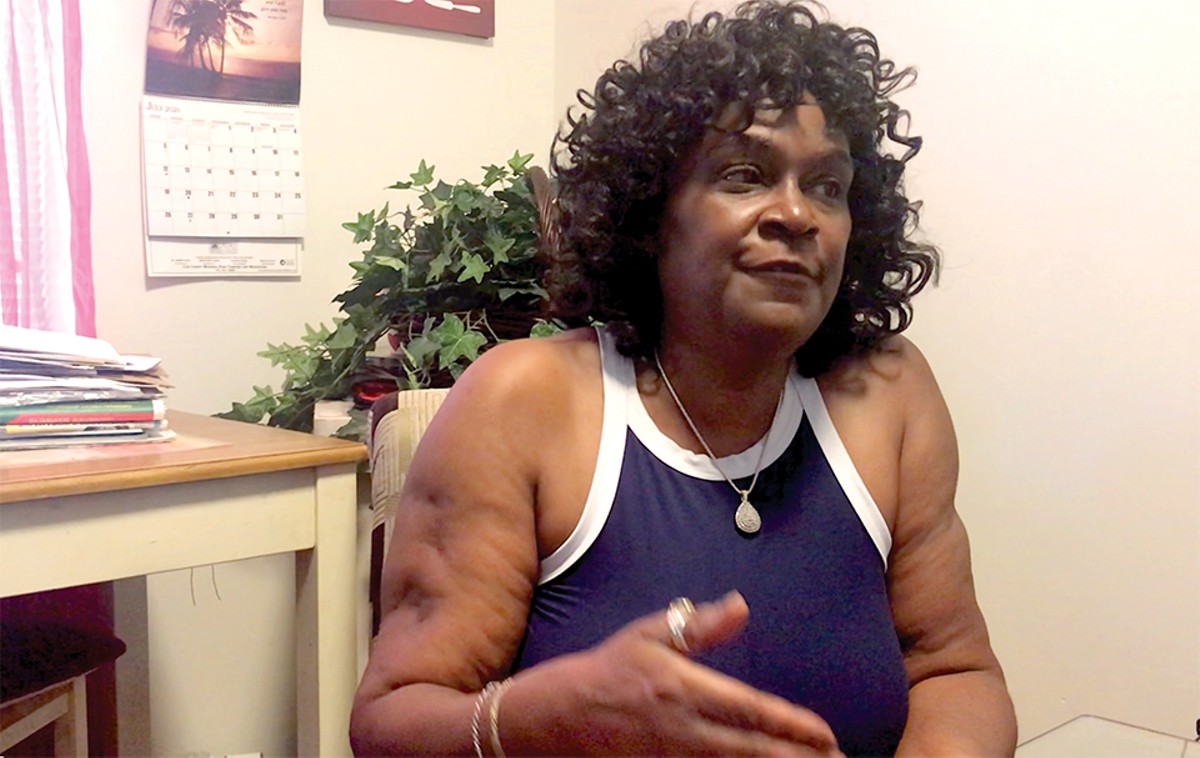 Beverly Jones's heart is with her neighborhood — even when she can't be there. DENISE HOLLINSHED

COURTESY BEVERLY JONES
Beverly Jones with one of her grandsons, Nigel.

Jones started dating and smoking marijuana at thirteen, became a mom at fifteen and started selling joints at school at sixteen.

Later, she would both sell and use more potent narcotics, including PCP, which she called "an elephant tranquilizer."

Jones never married, and at the age of eighteen, she began living with her boyfriend. She had her second daughter at age twenty, in 1983, third daughter in 1985 and her fourth daughter in 1991. She would live off and on with her common-law husband for 20 to 25 years. They are no longer together. During the time she used, Jones says, her home became a drug house where her clients would buy and use their drugs. She would drop her children off with her mother, and say, "I'll be back."

"Did I ever get in trouble?" Jones says. "Yes, I did. I was never perfect, but I learned how to be savvy very early. Was it always legal? Of course it wasn't, but am I ashamed of it? No, I'm not, because that makes me who I am right now. I think that's why I like working with young people, because we put so much on them and we don't even realize it as adults that their minds are somewhere else. And we want them to do this. Well that doesn't fit everybody."

"I look at myself now and say I have the best of both worlds and put it together. I go to work. I make money. I do stuff in my community. I know what I want to present to the world."

In the meantime, she has been struggling to hold her family together. Jones says her grandchildren have not enjoyed living with her. They are unhappy with the rules Jones has in her home, such as keeping their rooms clean, doing chores and abiding by curfews she sets when they go out.

"They don't like me because I make them responsible for what they do," she says. "They are making choices on their own, but they are not going to get their way. That's not the way it is done."

Jones says they are unsettled by the fact that both their mother and brother are locked up.

Her granddaughter is a student at Soldan and has been schooling at home, and her grandson is back in the classroom at Carr Lane Middle.

"I think they need counseling to get their frustrations off because it doesn't work well on me," she says. "They have built up anger, and they are acting out in every way imaginable, and I'm supposed to accept it. Life is not made up like that. There's consequences for everybody."

At times, she feels the weight of other people's expectations — real or imagined. It makes her bristle.

"This is the time I'm supposed to have for myself, but I'm focused on what I have to do for them. I am supposed to be past this stuff."

Jones says not being able to visit her incarcerated children and grandchild has been difficult.

"That drives me crazy," she says. "I can only wait for a phone call. Heaven knows that I want to know what they are up to."

Her anxiety ratchets up when she thinks about her grandson, Michael, who has been battling a form of leukemia, though he is now in remission. If he gets COVID, she fears it might finish him.

Pamela Meanes, an attorney with Thompson Coburn, one of St. Louis's silk stocking law firms, met Jones in 2014 at one of the protests over the police shooting of Michael Brown. Meanes appreciated her assertive manner and saw that so many people were looking to her for guidance or her assent.

"I found her to be a unifier," Meanes says. "I saw leaders seek her out."

As did Meanes when she became president of the National Bar Association, a nearly century-old organization of predominately African-American attorneys and judges. Meanes was seeking connections with protesters to help the cause while keeping a low profile.

"Beverly to me was a conduit because of her commitment and her continued desire to see change in the region," Meanes says.

The National Bar Association took a stand and questioned how the grand jury weighed the evidence that concluded that Darren Wilson should not be indicted in the shooting death of Michael Brown.

Meanes says you would never know that Jones had her own troubles haunting her during that time.

"Beverly never placed her burdens on anyone else," Meanes says. "Most people didn't know."

"I think she used it as fuel to make her go stronger," she says.

In the meantime, Jones is in a holding pattern dealing with COVID-19, and waiting and waiting on McCormack Baron Salazar to finish renovations so she can move back to Preservation Square to advocate for her friends and neighbors.

"That neighborhood is important to me," she says. "I want to be a part of the reason why it comes back."

Denise Hollinshed served as a crime reporter for the St. Louis Post-Dispatch for 21 years until retiring in 2019. In her work, she has specialized in writing stories that go beyond crime to examining root causes, such as poverty and social determinants of health.

Before Ferguson Beyond Ferguson, a nonprofit racial equity project, is telling the story of families in 63106 one by one over the course of the pandemic. This is the first chapter in Beverly Jones' life. Reporter Denise Hollinshed will be following the challenges she faces until the pandemic abates. The Riverfront Times has published other stories as part of the project and so have other St. Louis media. You can find an archive of the stories at https://beforefergusonbeyondferguson.org/63106-project/