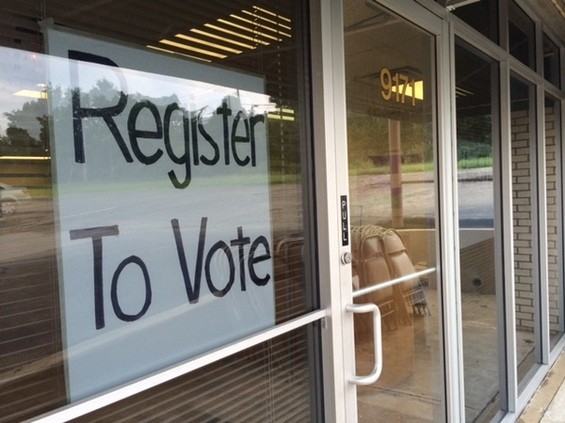 In a statement released early this afternoon, Senator Rita Heard Days, Democratic director of the St. Louis County Election Board, admitted that her office released wildly inflated figures in response to press inquiries about how many new voters have registered from Ferguson.

Less than a week ago, Days' office reported that 3,287 brand new voters registered in Ferguson after the shooting death of Michael Brown on August 9. The figures seemed to show an energized voter base and the promise of political change in Ferguson -- the current mayor James Knowles was elected with only 1,324 votes back in April.

But according to her latest release, Days' office is now putting that figure much, much lower -- it seems only 128 new voters have registered in Ferguson.

"Turns out that was an incorrect report that we were using," she told Daily RFT.

Days said that the much larger figure came from something called the "voter summary report" which she thought was a measure of all new registrations coming in. But after looking into it further, she said the "exorbitantly high number for the city of Ferguson...just did not jibe." After consulting with the Missouri Secretary of State's office, Days said she realized that the 3,000 figure is actually a tally of the total number of interactions with Ferguson residents that had anything to do with their voter registration, so that included changes of address and other alterations to records. When broken down by type of activity, she saw that the actual figure is only 128 new registered voters.

"Let me apologize for that," Days told Daily RFT. "There's really no excuse, it's just an explanation."

We asked Days to send documents show the new figures and her assistant sent back this screengrab. We're trying to figure out what this database is exactly and will update when we hear back, but it seemed to now show 132 new registered voters: 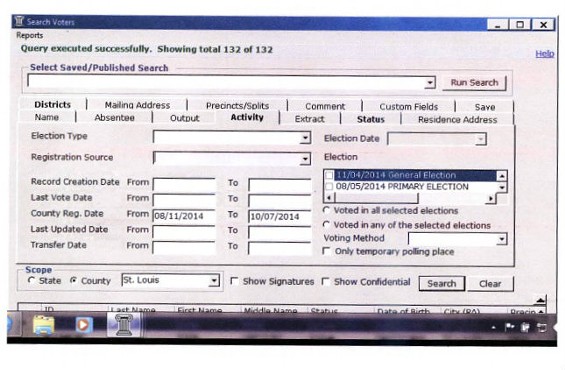 Ferguson Democratic Committeewoman Patricia Bynes told Daily RFT that when she first heard the 3,000 figure she automatically assumed that included changes in names and addresses.

Bynes dismissed conspiracy theorists who suggest that voter registration cards coming out of Ferguson are being purposefully lost.

"I need people to actually listen to the elected officials that represent people in Ferguson and if you aren't elected to represent the people of Ferguson but you represent other people, this is not your domain, this is not your expertise. You have to fall back and work with the representation that's here," she said.

Asked if her comments are specifically directed at Ward 21 Alderman Antonio French, who's been vocal about voter registration and promotes that effort from his #HealSTL offices on West Florissant, Bynes said, "He isn't the only one."

We reached out to the Secretary of State's Office for more information and we'll update as we learn more.

Here's Days' full statement on the mistake (emphasis ours):

Our office has received many inquiries about new registrations in the Ferguson Community since the Michael Brown incident.

We provided what we thought was an accurate number based on the report from our statewide database. A discrepancy was identified in the report that provided us with the numbers we released to you last week. Those numbers were not accurate and we apologize for any inconvenience this may have caused. We contacted the Secretary of State's Office (SOS) to inquire about the discrepancy and were told that the report we were using to generate our numbers was incorrect.

And this seems like an apt time to remind everyone -- tomorrow is the deadline for new voter registration!