Finally, A Survey that Says St. Louis is Tip-Top 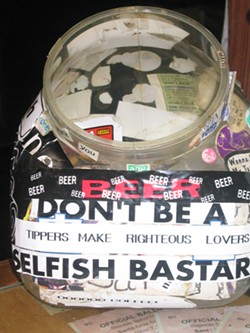 economicsociologist.files.wordpress.com
Or at least we're the top tippers.

The food/travel guide Zagat published its annual "America's Top Restaurants" edition last week and the book includes a survey of which cities leave the biggest tips by percentage. St. Louisans beat out the highfalutin cheapskates in Seattle and San Francisco to be named the nation's most generous diners.

Via the St. Louis Business Journal:

St. Louis diners tied with those in Philadelphia as the best tippers in the nation -- leaving a gratuity of 19.6 percent on average, according to a Zagat survey released Wednesday.

The results were culled from polling more then 145,000 surveyors who ate 24 million meals at 1,533 restaurants in 45 cities over the past year.

Other top tippers were diners in Denver and Charlotte, N.C., who tipped an average of 19.5 percent. They were followed by a five-way tie for fifth place (Boston, Detroit, the state of Ohio, New Jersey and New Orleans) at 19.4 percent.

The stingiest tippers were found in Hawaii and Seattle, with an average of 18.4 percent of the bill, followed closely by San Francisco at 18.5 percent. The average tip in the U.S. was 19.1 percent.

Nice to know that even though we're now known for violent crime, child abuse, animal abuse, energy inefficiency and being a "recession-proof retirement destination" for old white folks, we're not a community of Mr. Pinks.