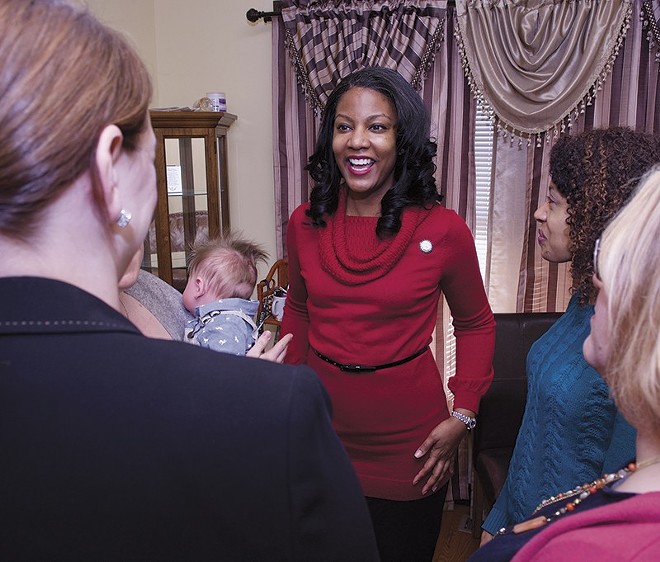 Photo courtesy of Jones campaign.
Tishaura Jones has twice been elected as the city's treasurer.

A former city worker is alleging in a new lawsuit that St. Louis Treasurer (and mayoral hopeful) Tishaura Jones fired him in April as political payback for challenging her preferred candidate for 26th Ward Democratic Committeeman.

The lawsuit, filed Monday in St. Louis City Circuit Court by Donald Gage, claims that Jones retaliated against Gage, who was working in the office's fleet division, after he filed as a candidate for 26th committeeman on March 29.

Three days after Gage filed for candidacy, the suit alleges, the office's director of human resources called Gage before the end of a Friday shift. Gage was allegedly told to go home and not come back. According to the lawsuit, another week passed before he received a letter in the mail, "informing him his position was eliminated."

According to the lawsuit, before his termination Gage worked as a driver ferrying jurors to the Civil Courts building downtown. His decision to file for candidacy set up a contested election with the 26th Ward's longtime incumbent committeeman, Joseph Palm.

Palm shared a political slate with Jones, who herself was running for the vacant 26th Ward committeewoman slot. It was Gage's election challenge against Palm that allegedly put him in Jones' cross-hairs.

However, the August primary ended badly for Gage and Jones. Both lost their respective races. Palm beat Gage — by almost 20 percentage points — to keep his job as committeeman, while Jones lost the committeewoman spot to State Representative Karla May.

Reached Tuesday, Jones' chief of staff Jared Boyd confirmed that Gage had been employed in the Treasurer's Office until April. Boyd declined to comment on the lawsuit, citing the office's policies against making public statements about ongoing litigation.

The timing of Gage's lawsuit bears mentioning. St. Louis' highly contested mayoral primary is set for March 7, and the candidates are throwing everything they've got into the final days of the campaign. Christmas tells Riverfront Times that the lawsuit's timing was no accident, but an intentional message to voters about Jones.

"I did want [the lawsuit] filed before the election," says Christmas. "I thought it was important to show the type of politics that she plays before voters think about putting her in the mayor’s office."
Follow Danny Wicentowski on Twitter at @D_Towski. E-mail the author at [email protected]