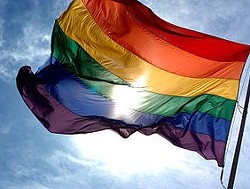 In Missouri, it's legal for employers to fire or refuse to hire individuals because they are gay. A majority of businesses, however, aren't even aware this is the case -- and when polled on the matter, agree the state needs a law preventing this kind of discrimination.

These are the findings of a new poll that PROMO, the statewide LGBT advocacy group, is touting this week -- on the heels of a failed legislative push to pass a non-discrimination law in the state.

The opinion poll released yesterday by Small Business Majority, a national nonprofit advocacy group, finds that more than half of Missouri entrepreneurs believe that federal and state laws should ban employment discrimination against gay and transgender people, PROMO says. A majority also agrees that employer should not be able to fire or refuse to hire LGBT people based on their religious beliefs, the poll says. 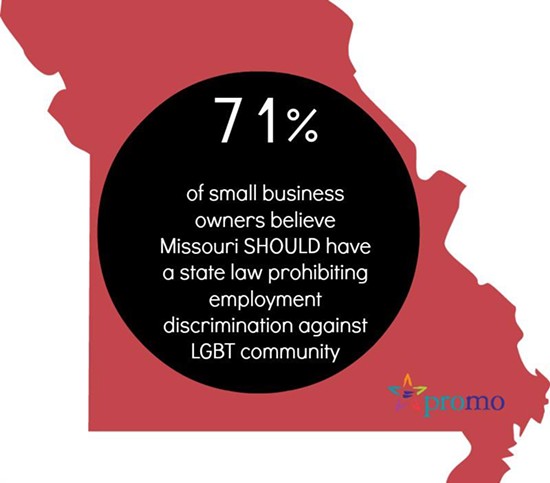 Conducted April 8 through 17 by Greenberg Quinlan Rosner Research, the poll finds that 69 percent of entrepreneurs were unaware that it is legal in Missouri to refuse to hire someone based on sexual orientation or gender identity. Further, 72 percent incorrectly believe it's illegal at the federal level. And 71 percent of owners believe Missouri should have a state law against this kind of discrimination, the poll says.

"People don't necessarily realize you can be fired if you're gay," Bockleman says. "It's just a lack of awareness even among the gay and lesbian community.... This is not a protected class." 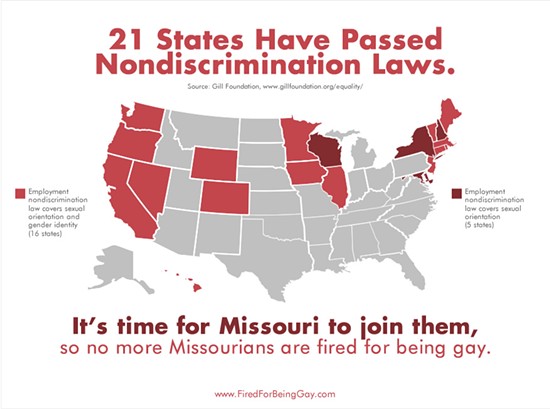 His organization and other supporters pushed this past legislative session to advance a proposal to put in place a nondiscrimination act that would make this kind of prejudice illegal. The group launched FiredForBeingGay.com as a way to drum up support -- and got testimonials from elected officials across the state, including some Republicans.

The bill in question made it farther than it ever has before.

Just half an hour before the legislative session ended last month, the Senate passed State Senator Jolie Justus' bill. The House did not vote on the matter. 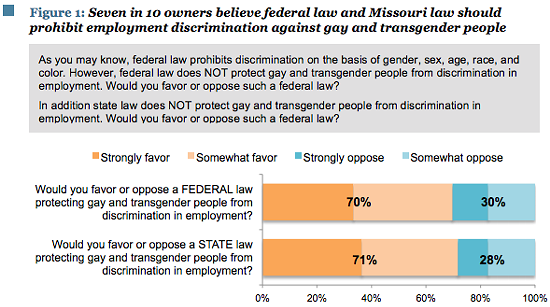 "We've had a significant advancement every single year," Bockleman says. "I would hope that we can see it happen in the next year or so.... It's not as polarizing in the political sphere as it once was."

Here's the full Missouri results of the poll, which also looked at four other states.