Between roles as homicide detective and ESOP president, Sgt. Heather Taylor often found herself in opposition with her own department. DANNY WICENTOWSKI

In her final hour as a St. Louis homicide detective, Sgt. Heather Taylor stands in the shade of the World's Fair Pavilion in Forest Park. She is surrounded by blue uniforms, though she's gone casual to her own retirement. Her long maroon cardigan swishes freely, unencumbered by a gun belt. Her feet are tucked into a pair of non-regulation Chuck Taylors. Her hair, worn in a cascade of braids, would never fit under a uniform hat as required by the police manual.

For the past twenty years, she's served the St. Louis Metropolitan Police Department, much of it as a homicide detective. But as the public face of a police association for Black cops, Taylor has spent the past six years walking a far different kind of line than the stark blue border so commonly splashed across hats and flags.

It's a line she began following long before she put on a badge. And today, on a windy Friday morning, she's going to finally walk away from it.

"My main goal," she remarks as she arrives at the September 25 event, "is to try not to cry."

She'll fail, but she won't be the only one. Of the 30 uniformed cops in the audience for this "Final Roll Call," many are members of the Ethical Society of Police, one of two police associations representing cops in St. Louis. The associations have had, at best, uneasy relationships since their respective origins in the late 1960s. Ethical was officially recognized by the department in 1972, its founders Black officers inspired by the civil rights era. Four decades later, as a new civil rights era arose in St. Louis, Taylor became Ethical's president.

Taylor is deceptively soft-spoken in media interviews, but, for the first time on the record, she spoke at length to the Riverfront Times about herself, including her improbable journey from a traumatic childhood in north St. Louis to the murder scenes that filled her nights as a detective.

As president of Ethical, or ESOP, Taylor's voice pierced the blue wall of silence in ways no one could ignore. In 2016, when she called for then-police chief Sam Dotson to resign, she released a 112-page report to back up the group's charges against the department's racist internal policies. In 2017, she publicly denounced the police killing of Anthony Lamar Smith and called for a guilty verdict in the case of the officer who killed him. She called racist cops racist and put them on blast on Twitter. She didn't let things slide.

Once, when a CBS News reporter asked her if there were white supremacists in the department, she responded immediately: "Yes."

While making a habit of breaking the blue code, Heather worked a long career in that very department.

She was tasked with closing murder cases, a rare justice in a city where witnesses are often too scared to talk and roughly three-quarters of all killings go unsolved. But witnesses talked to Taylor. She solved cases. In 2012, she became the department's first Black woman to make detective supervisor as a sergeant.

The retirement ceremony marks the close of both sides of Taylor's unique career, one that traversed the lines between cop and activist, authority and watchdog. In her honor, and for the last time, those sides are coming together.

On the pavilion's perimeter, next to a table decorated with balloons and individually wrapped cupcakes, an animated John Hayden, the city's police chief, mingles with other attendees. He rises to the podium as the "Final Roll Call" rolls through its first speakers.

"If I were to describe who Heather is, in our community, what she represents is inconvenient truth," he tells the crowd. He jokes that he wishes he could call their relationship "mentor-mentee," but he adds, "We argue quite a bit."

He's not the only chief to do so. As he addresses the pavilion, he obliquely references his predecessor, Dotson, who retired under pressure in 2017. In Hayden's telling, Dotson had tried to put Taylor in her place.

"The previous chief didn't like that inconvenient truth," Hayden continues. "He told her, 'You need to pick your battles.'"

But there's a problem, as Hayden explains, with trying to tell a person like Taylor to turn down a battle worth fighting for.

"Heather only knows the truth," the chief says. "What she also believes is that the time to do the right thing — is right now." 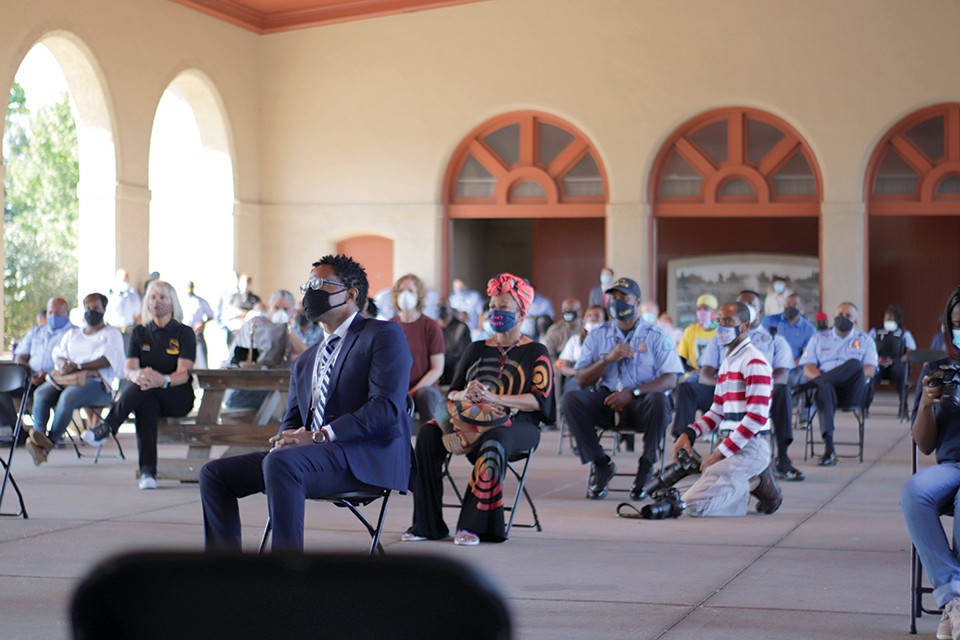 STEVEN DUONG
Taylor's "Final Roll Call" ceremony drew some 30 officers, as well as St. Louis County Prosecuting Attorney Wesley Bell. "She looks you in the eye and she tells you exactly what she’s seeing," Bell said in his remarks.

In 1973, one year after the founding of the Ethical Society of Police, its future president was born in the Ville neighborhood of north St. Louis. Heather Taylor was the youngest of five, her father a chef and her mother a homemaker and custodial worker. Her older brother, Diamond Slater, was her best friend.

"We were extremely close," she says in an interview, one of several with the Riverfront Times in the days leading up to her retirement. She rarely talks about this part of her life story, the heartache of it, the loss. But to trace the steps that led her to the city's homicide division, you have to start at the beginning of her relationship with the police. Diamond was the first chapter in that relationship.

"He was getting into trouble, always running from police or police were showing up at the house," she recalls. "We grew up knowing that not all the officers were bad people, but some of them were, some of them were racist. It was still a noble profession."

Sometimes, the police did more than just show up at the front door. When she was ten, Taylor remembers watching two officers force their way into the family's home while pursuing Diamond for his latest lawbreaking: theft of an ice cream.

"They didn't have a right," she says now, though of course the officers did it anyway. Taylor says one officer clasped handcuffs around the wrists of her seventeen-year-old sister for the offense of talking back.

Taylor had grown up respecting police. Her cousin had joined the city's department, and Taylor remembers liking how she looked in uniform; she imagined how it would look on her. Despite the violation of her home, she says the incident didn't alter her aspirations — she still considered it "a noble profession."

By the time Taylor started high school, her best friend and brother was still getting into trouble. In 1989, when he was sixteen, the trouble was much worse than stolen ice cream.

"My brother had killed someone, literally a block away from our house," she says after a pause. "My mother found him, cornered him and turned him in. It was a difficult time, a very difficult time. He was essentially my only friend, and he's gone. This big piece is gone."

There was no question of trying to protect him, Taylor says. Her mother made that clear: "He had to be held accountable for what he did." And he was: Diamond was charged with second-degree murder and certified as an adult. He pleaded guilty and was sentenced to 25 years in prison. Taylor and her family struggled to move on.

"I was lucky enough to have a friend who had a basketball hoop," she says. "It took my mind off it."

The sport helped her become the first person in her family to attend college. In 1992, Taylor, a six-foot-tall forward, enrolled at Southern Illinois University Carbondale on a scholarship to play Division I basketball. She was still trying to decide between joining a police department or enlisting in the Marines.

During her sophomore year, she got a call from home. Her aunt, Denise Stith, had been dating a St. Louis deputy marshal named John Parker. Around 7 a.m. on April 3, 1993, Parker came home, got into an argument with Stith and shot her in the head with a .38 pistol.

Again, Taylor's family life had been overturned by violence. Her coach urged her to go home for the season. Parker was arrested and charged with manslaughter, but Taylor says she later learned from the family's attorney that he was released just three years into his twelve-year sentence.

Two killings. Two convictions. Two systems. It was a lesson she never let herself forget.

"What happened wasn't right," she says now. Her aunt, she adds, "was pretty much the fighter and leader of our family." The family was never the same. Neither was Taylor.

"My brother got 25 years for something he did, and you have someone in law enforcement who only got three," she says. "Three years for just destroying our family, and he gets a slap on the wrist."

Taylor returned to college but says she was "still in a haze" after her aunt's murder. She kept playing basketball but dropped out of college before finishing her degree. She returned to St. Louis. Along the way, she met the man who would become her husband, a recent veteran of the Gulf War who urged her to reconsider a career in the military.

On September 11, 2000, Taylor took her seat on her first day of the police academy. She'd join the "noble profession" that had taken her brother away in the name of justice, the same profession whose status had seemingly protected her aunt's murderer from facing the same.

"It made me want to become a police officer even more," she says. "I just had this unbelievable belief that I could change it."