For Post-Dispatch Carriers, a Shrinking Print Edition Makes a Hard Job Even Harder 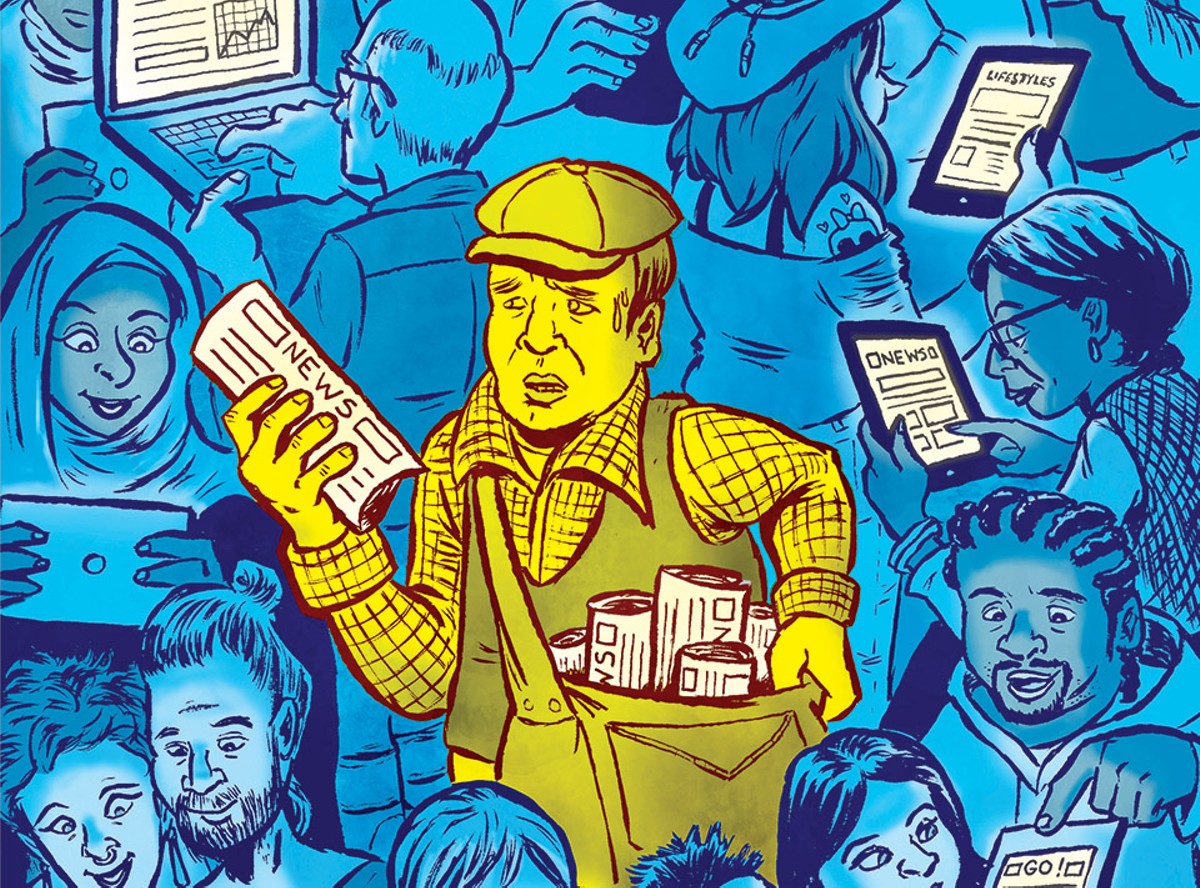 What's a newspaper carrier to do in an increasingly digital world? DMITRI JACKSON

Andy Christmann has a harder time these days throwing the St. Louis Post-Dispatch so that it lands on the driveway near the garage door.

The newspaper has far fewer pages than it did when he started as a carrier three decades ago. And that means less weight. Imagine switching from a baseball to a paper airplane.

"There is no force against your arm, so you can't sling it like that," says Christmann. "Otherwise you are going to burn your elbow and your rotator cuff. We make a lot more pitches every night than any pitcher does in a year."

Despite the extra effort, Christmann still swerves at night around the darkened streets of south St. Louis County, delivering papers from a Chevy Suburban with more than 300,000 miles on it. He adds another 40,000 miles each year, most from driving his 25-mile route each night. (His trip to and from the depot to pick up the papers adds another 25 miles.)

Christmann's car swings slightly left and right when he drives. With the interior lights on, he presses lightly on the gas, looks at a binder with the addresses of subscribers and rolls and stuffs the papers in plastic bags that hang from the rearview mirror.

Curious police officers have tailed him and pulled him over. New Year's Eve is the worst night of the year for carriers. "All the amateurs drunks are out. Professional drunks are OK," he jokes.

But on other nights, Christmann enjoys having the road to himself. He keeps his stereo tuned to Christian Radio St. Louis (1320 AM).

"Once you learn the route, you can put it on cruise control, which in this business means driving with your knees, listen to the radio, and in the winter, it's just beautiful when the snow is drifting. It's just you and the deer and the rabbits running around," he says.

The job doesn't pay as well as it used to. He once had 900 subscribers. He still has to drive the same distance but there are about half as many customers along the way, he says, owing to the fact that younger generations don't subscribe to the print newspaper anymore. The paper had an average of 238,000 subscribers to the Monday through Friday print edition in 2009; in the first quarter of this year, there were 70,543, according to the Alliance for Audited Media.

Still, that's more than 70,000 people throughout the metro area interested in breakfast and coffee and stories about the St. Louis Blues or former St. Louis County Executive Steve Stenger. They like to flip through paper rather than move their thumb on a tiny machine. And they are the ones keeping newspapers like the Post-Dispatch in business. While Lee Enterprises, which owns the Post-Dispatch, has placed an increased emphasis on its digital presence, advertising in print products — which is driven by circulation numbers — still accounted for almost 70 percent of total advertising revenue in fiscal year 2018, according to financial filings.

The problem is that some people who still are willing to pay for the paper don't have reliable carriers like Christmann. They wake up in the morning to find an empty driveway, and they're not happy.

The Post-Dispatch is fighting an uphill battle on several fronts: against young people's online reading preferences, against advertisers' migration to the internet and against all the other publications offering their content for free. The difficulty of finding, and retaining, good carriers is just one pressure point in a stressed system.

But since print subscribers serve as the paper's lifeblood, ensuring reliable delivery is absolutely critical. The Post-Dispatch may not be able to survive without people like Andy Christmann.

ERIC BERGER
Newspaper deliver has been good to Andy Christmann.

Christmann, 73, first got into the newspaper business after his second son was born. The baby spent the first eighteen months in a bubble in the hospital because his immune system wasn't working. To bring him home, they had to create a sterile bedroom: "plastic floor, plastic on the beds, plastic everywhere," he says.

Christmann or his wife had to stay with him at all times. Christmann had been working as a civil engineer. On his own time, he built a home addition for a newspaper carrier. As partial payment, the carrier offered Christmann half his delivery route. The night job allowed Christmann to spend the days with his son. It was a "really good business," he says.

Carriers like Christmann owned their own routes, which meant they were contractors who purchased the day's papers from the Post-Dispatch at a wholesale price and then sold them to customers. They kept the difference — minus expenses for gas, car maintenance and insurance.

But in the early aughts, the paper increased efforts to buy routes from home delivery carriers and distributors who delivered to vending machines and retail establishments for single-copy sales.

"This enables us to go with one price for home delivery as well as single-copy promotions and allows us to more aggressively market our newspaper," Matthew Kraner, then the general manager of the Post-Dispatch, told the St. Louis Business Journal after a round of acquisitions in 2003. "Secondly, it lets us expect more consistency of service to home subscribers and retail outlets."

In 2005, the Pulitzer family sold the Post-Dispatch and its other newspapers to Iowa-based Lee Enterprises for $1.46 billion. Its route purchases had helped increase the value of the company, the Business Journal reported.

Some carriers accepted the offers; others, including Christmann, did not.

"I don't know that I could have found a job with as little pressure and as easy as what I had," he says. But his profit has continuously decreased. "I'm not making as much this week as I did last week."

In 2015, a group of carriers sued the Post-Dispatch and Lee Enterprises for damages in excess of $25,000. They claimed that the newspaper had violated its contract with them by, among other things, not sharing additional revenue from a rate increase to weekend subscribers.

Some carriers, including Christmann, settled in January 2018 for an undisclosed amount. A jury trial for the remaining plaintiffs is scheduled to begin in September, according to court filings.