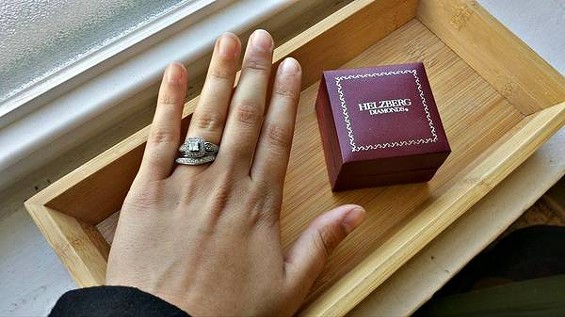 Even if you're not in the market, Craigslist postings of engagement rings for sale make for fascinating reading.

"The girl that it was for unfortunately left me...Willing to trade for a bike," writes one prospective seller. "Small, elegant, brilliant ring. Worn four days after Christmas," writes another.

But one post in particular caught Daily RFT's interest recently. Christine Farris, 26, of Tower Grove East, is selling the ring her 66-year-old father bought for the woman who left him after he had a stroke -- a fourteen-carat, white-gold ring with a one-third carat, princess-cut diamond and matching contour wedding band.

"His wife-to-be didn't want to take care of someone in stroke recovery, so she broke up with him," Christine Farris writes in the Craigslist ad. "My dad has asked me to try to sell the wedding set to help pay for the mounting medical bills."

Farris tells Daily RFT she needs thousands of dollars for rent and a deposit to move her father into an independent-living facility after his stroke. Because jewelers won't pay more than $500 for the $2,000 ring, she hopes to find a committed, dedicated couple who'll buy it.

"Life can really suck. Things like a stroke can happen," Farris says. "I want [the ring] to go to a couple that is really in it for the long haul and can see past the wedding into old age. I want it to be a couple who is really going to take the vow of marriage seriously and know it's not just a pretty ring and a party."

Farris, a registered nurse, speaks quickly with poise and authority, so it's surprising when she suddenly breaks into tears describing her father Mike's final breakup.

The fiancee originally agreed to care for Mike after his stroke, but Farris had her doubts. Even when the engagement was new, she never seemed serious about tying the knot. Farris remembers the fiancee having a panic attack while trying on wedding dresses.

"I said, 'Give it a week,'" Farris says. "A week later, my dad called saying, 'I'm kicked out. I have no place to go.' She brought him back and just dumped him on my porch." 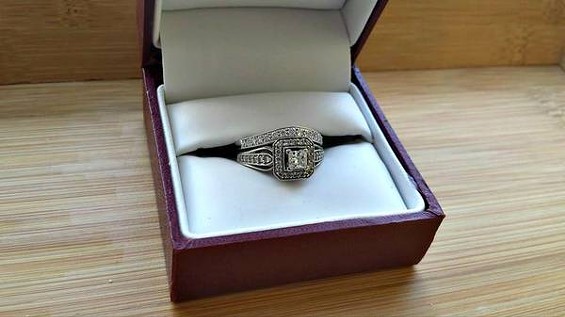 Craigslist
Another view of the ring.

That leaves Farris, with her background in nursing, as his primary caretaker. The stroke has erased many of his bad memories of the relationship, so Mike often forgets he's no longer engaged.

"He's basically a grown toddler right now," says Farris, who describes her father as a brilliant, nurturing man. "It's been harder than anything I've ever imagined. Now he's been reduced to this dazed old man that I barely even know."

Farris thinks her father's ex-fiancee originally agreed to care for him out of guilt. The fiancee used a wheelchair while she had nine knee surgeries in four years, and Mike moved in to care for her.

"It's not that she didn't love him," Farris says. "She did. I think she saw the stroke as an opportunity to fix things, like, 'I can prove to myself and everybody else that I'm capable of this.'"

But that didn't last.

Farris says the strangest thing about selling her father's ring on Craigslist is how many kind and consoling notes she gets. People who find her post and read her father's story sometimes send her emails just to say they're sorry for what she's going through.

"I didn't know Craigslist had the capacity for emotion like that," she says.