For the Love of Cycling: New Website Sponsors Checkpoint Race This Friday 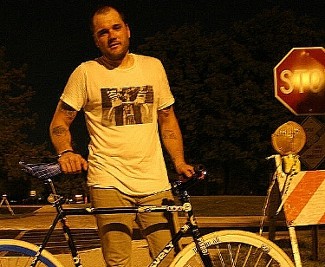 Matt Hartman wants to bring together the various local biking communities with his web forum and events calendar.

Matt Hartman can see the flowers.

It's one of the changes he's noticed ever since epilepsy took away his ability to drive a car five years ago, forcing him into a biking lifestyle.

"You pick up on the quirky, intricate things on the road that you don't notice going 40 miles per hour in a car," says Hartman, 29. In addition, he says, "I can read the clouds when it's about to rain, and I know the storefronts to duck into when it does."

Hartman isn't alone. Over the past few years he's seen a significant uptick in ridership. The numbers back him up -- according to census data, the number of St. Louisans who bike to work increased by 97 percent from 2000 to 2009, and 50 percent from 2007 to 2008.

Now, a few months after launching his website, SpokedSTL, Hartman is celebrating the growth of the cycling community by sponsoring the first in a series of five checkpoint races this Friday, September 30. Riders of all skill levels may participate. (Free PBR for those who roll up to the starting gates early.)

Hartman, a master's level student at Webster University (who recently re-obtained his driving privileges), built his website to give bikers of all backgrounds an opportunity to meet through web forums, group rides and get-togethers at local bars.

Hartman's Lit-Up Alley Cat Race borrows the name from an international biking concept born in Toronto a couple of decades ago. "Alley cat" refers to a bicycle courier who makes a per-delivery commission; the faster you can cycle from Point A to Point B, the more money you make. In other words, to be a good courier, you need to know your street grid, including the alleyways.

On Friday, race entrants can meet as early as 5 p.m. at the Tower Grove Park Stone Pavilion where PBRs will be consumed and food will be served, courtesy of the bicycle courier service South Grand Delivered, where Hartman works in his spare time. Interested racers can pre-register online or simply show up. (Entry fee is $5.)

Just before the race begins at 7 p.m., each cyclist will receive a list of five fountains in the city. (The "Lit-Up" Alley Cat Race refers to the fountains, not the bikers.) Once the race begins, participants must cycle to each fountain -- in any particular order -- and collect a glowstick bracelet. The first cyclist to collect all five bracelets wins a "massive and obnoxious trophy," says Hartman. There will be second- and third-place trophies, too, along with smaller prizes. Following the race, which should last about an hour, an after-party will be held at the HandleBar, a watering hole in the Grove neighborhood.

In a car-centric city like St. Louis, Hartman, who grew up in Jefferson County and now lives in Shaw, says he's pleasantly surprised with the growing bike movement and points to a handful of reasons for its rise in popularity: a bad economy, a growing number of young people living downtown and a greater emphasis on health and the environment. Add to that a dwindling Metrorail ridership since 2008, as the St. Louis Post-Dispatch reported yesterday, and a new downtown biking commuter station that's been highly touted by Mayor Francis Slay.

"The numbers are astounding," says Josie McDonald of Trailnet, a non-profit organization that advocates for a more bike-friendly St. Louis region. The organization observed a growth of 83 bikers in its 2011 "Bike to Work Day" compared to the year before.

Hartman, who sports a black ID bracelet with a serial number that links to an online medical profile in case of an accident, says his website has already forged many connections. He's found himself chatting with fellow riders via his online forums, only to realize later that he passes them all the time in the streets.

There have been a handful of pioneering groups to build the movement. FBC (short for "The Fucking Bike Club"), for instance, hosts several "Full Moon Rides" during the wee hours of the morning that attract many bikers with party-hard mentalities. STLBiking, in turn, is a go-to platform for competitive cyclists.

With SpokedSTL, Hartman hopes to bring everyone together under one big, come-one, come-all tent, with a calendar full of both pre-planned and spontaneous rides and events.

"Other bike blogs appeal to different genres of bikers -- the people who ride in spandex, for example," says Andy Heaslet of South Grand Delivered. "Matt's going after the guys in cut-off jeans, the commuters who bike to school or work, the people who think biking is just a fun thing to do."

It's a very simple mission, says Hartman, who is funding his events with his own money for now and hopes to turn SpokedSTL into a business. "I don't want to sound too Robin Hood, but I really just want to help the community," he says, "Whenever I see more bikes on the road, I just get stoked."