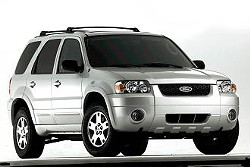 Left, toward Kentucky.
So, here's an interesting twist to the political story du jour in Jefferson City.

As you probably know, legislators are meeting in a special session this week to consider offering Ford $15-million in annual tax-incentives for a decade if it upgrades its Claycomo assembly plant outside Kansas City.

Now comes news yesterday from a president of the UAW that Ford plans to stop making its Escape SUV at the Claycomo plant regardless of what happens this week in Jeff City.

Instead, the automaker will move production of its next generation SUV to a plant in Kentucky.

As the UAW argues, Ford's proposed move is all the more reason that the state needs to offer the automaker incentives to upgrade its Claycomo plant.

"If we don't pass this, we're not competing at all," Ray McCarty, president of the Associated Industries of Missouri told the AP yesterday. "We don't have anything in our tool box right now to help attract those new product lines."

Hmm. I recall when auto workers made the same pleas back in 2005 when Chrysler was thinking about shuttering its Fenton assembly line. So, the state gave Chrysler $32-million in incentives and guess what happened?

Chrysler shuttered the plant anyway. It's sitting there rusting just outside St. Louis on Interstate 44. What makes me think the same fate awaits the plant at Claycomo -- no matter how much money the state throws Ford's way?