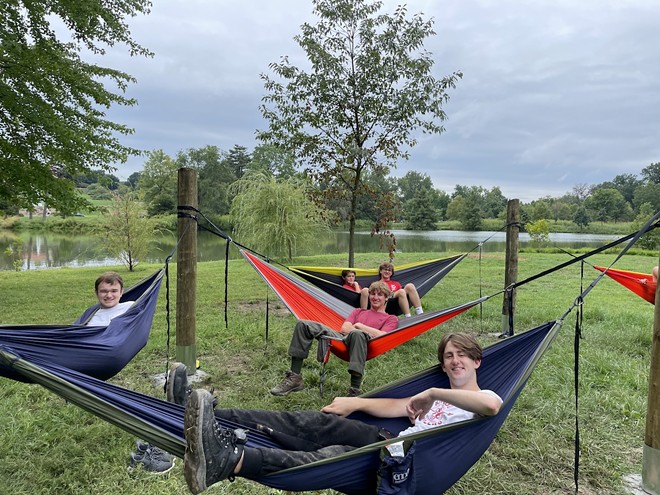 COURTESY OF AMY NOLAND
Zachary Noland (center, in red) hammocking with friends in the new hammock garden in Forest Park.

The first-ever "hammock garden" in St. Louis' Forest Park owes itself to a Kirkwood teen and his Eagle Scout project.

Zachary Noland, 17, is a senior at Kirkwood High School. A few years ago, at the pandemic's height, he got into what he calls "hammocking." Setting up hammocks in a park or backyard created a space for him and his friends to enjoy the kind of free-ranging conversations they used to take for granted inside. "It's the appeal of being social when it's hard to be social," he explains. "We'd hang out and just chat."

So when Noland, a longtime Boy Scout, needed a project to earn Eagle Scout status, he couldn't help but think about bringing to St. Louis a structure he'd seen at the Lake of the Ozarks Scout Reservation — posts designed to facilitate hammock setup, without harming trees. Sometimes called hammock villages or hammock hotels, he found quite a few examples around the U.S. on Google once he figured out where to look.

In the spring of 2021, Noland made his pitch to a park in Kirkwood. His mom, Amy Noland, was skeptical. "I don't know that anybody's going to want this," she told him.  Sure enough, the park said no — and then so did the middle school and then the high school.

That might have been strike three but for a friend of the family with an "in" at Forest Park. Pitching the granddaddy of the city's parks might have seemed like a ridiculous act of hubris — except Forest Park Forever, the nonprofit that runs the park, seemed immediately intrigued. "It was a complete 180 from the other meetings," Amy Noland says. "They were looking for a hammock solution."

"We weren’t looking for a project like this exactly, but we do occasionally receive requests and questions about hanging hammocks from trees in Forest Park," Jansky says. "So this project certainly provides a useful and tree-friendly option for hammock lovers."

Even with the nonprofit's immediate interest, Noland's task wasn't exactly easy — as with anything in St. Louis, layers of bureaucracy envelop Forest Park's 1,300 acres. Noland estimates he personally put 110 hours into bringing the idea to fruition, adding in the time of park personnel, his mom and other stakeholders the total rises to 460 hours. But the park's enthusiasm kept him going through months of back and forth.

On Labor Day weekend, Noland was finally able to check the project off his to-do list, as Forest Park's first "hammock garden" opened to the public. To celebrate, Noland joined seven friends in, well, hammocking. "It felt good that I could use it," he says.

Equally rewarding has been seeing photos and social media posts of other people using it (the Nolands ask hammockers to use #hammockingforestpark online).

It was also a true education — one Noland is grateful for no matter what happens to his Eagle Scout candidacy in the coming months.  He says it gave him a great lesson in the value of criticism.

Has the project given him a taste for project management? He's not sure. "I can't say it's something I'd look forward to, but I wouldn't shy away from it, either," he says. "Especially now that I've learned so much. The sense of completion is really satisfying."

And if you're into hammocking, thanks to Noland, Forest Park now has your back. Your head, too. 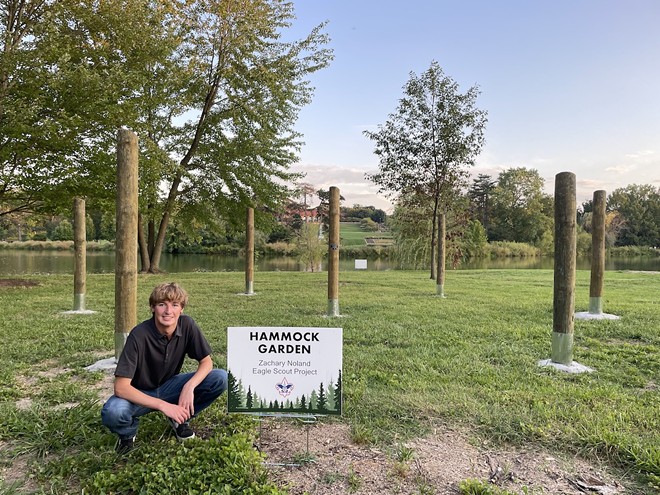