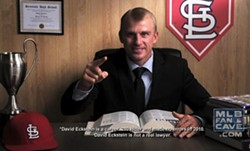 Eckstein, known for his grit on the field and his pesky chokehold on the bat, stars in a commercial parody for the law office on NBC's Parks & Recreation, at one point saying: "Let me save you from capital punishment by dishing out some gritty scrappital punishment."

The law firm is the brainchild/homage of Michael Schur, the show's co-creator and producer as well as a baseball statistics uber-nerd who wrote under the name Ken Tremendous on the sports statistics site Fire Joe Morgan.

Schur, who also wrote on the American version of The Office and played Mose Schrute, says he admires Eckstein's scrappiness but holds him as a talisman of the wrongheaded fascination with grittiness and "playing hard."

Schur also wrote that Eckstein "used a three-inch candy cane for a bat," referencing his high grip at the plate.

Eckstein may have three sabermetrics as his legal partners, but don't think he gets bogged down in the numbers himself. He told the Los Angeles Times before Game 3 of the 2013 World Series: "We lose focus on wins and losses. That's the only stat that really matters."

Bonus gif: Here's one of our favorite shots of Shur as Mose Schrute on The Office: