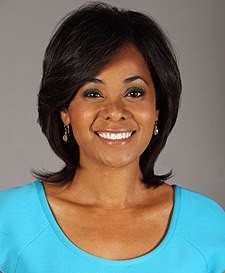 Image via
Vickie Newton, former KMOV-TV anchor, was cyber-stalked
Here's a strange revelation from Vickie Newton, who used to be an anchor at KMOV Channel 4: One of the reasons she left her job in August was that she was hounded by a cyber-stalker.

And the creep continues to harrass her today.

She made the situation public recently on Village Celebration, a website she founded that highlights people, stories and events in the black community.

According to the piece, Newton noticed e-mails disappearing from her personal and work accounts while still at KMOV.

After she left St. Louis and moved to Arkansas, the stalker ramped up his/her activity, sending "hundreds of bizarre e-mails everyday."

Newton says it's spilled over into real life, too:

she hid her computer, but her computer case is missing; the stalker has described the "sterling silver picture frames in her master suite;" and the alarm at her Arkansas lake house was going off while she was in St. Louis at early hours in the morning, but no one was ever found.

It's truly horrible that Newton has to deal with this.

It's equally horrible that Larry Conners can't find anything better to do with his time.

(Just kidding; our sympathies are with you, Vickie; may this harassment end as soon as possible.)