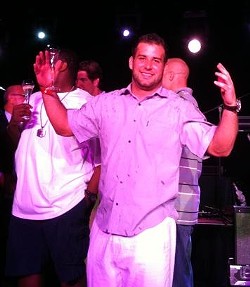 Chase Daniel after last night's Super Bowl. Are those stains on his shirt?
A year after leaving University of Missouri, quarterback Chase Daniel won his first Super Bowl ring last night with the New Orleans Saints.

Never mind that Daniel never entered the game. Just being on the roster entitles Daniel to all the Super Bowl spoils.

Oh and he's hanging out in Miami with his former teammate at Mizzou, Danario Alexander.


With my boy @d_alexander81 its nuts at the Intercontinental hotel! Kenny Chesney and Jimmy Buffet are about to perform!