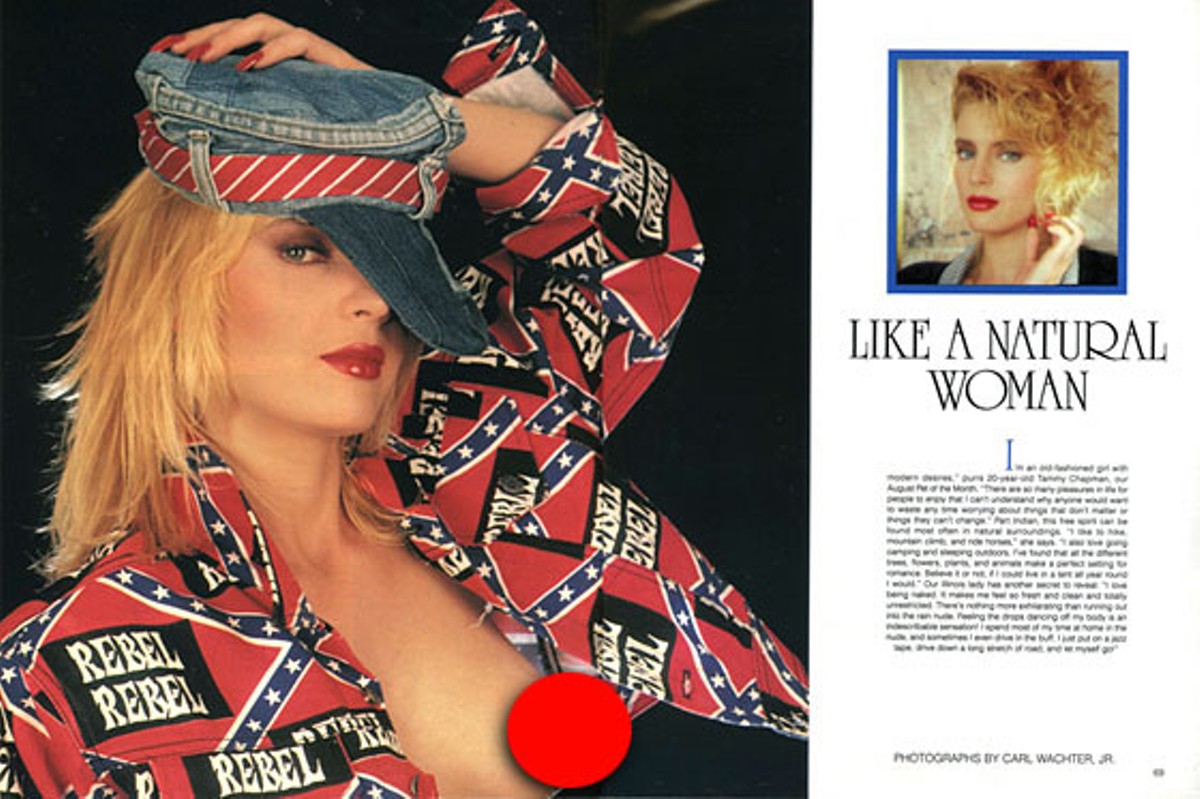 Tammy Chapman, featured in this August 1992 Penthouse spread, says Peter Kinder asked her to move into his condo — which is paid for by his political campaign. Go here to see a much larger, uncensored, NSFW version.

Tammy Chapman, the former Penthouse Pet photographed earlier this year with Missouri Lt. Governor Peter Kinder at a south-city bar known for its "pantsless parties," says she never had an affair with the politician — but it wasn't for lack of trying on his part.

In fact, Chapman tells Daily RFT, Kinder was obsessed with her nearly sixteen years ago, when she was a young stripper on the East Side and he was an up-and-coming Republican state senator — to the point that she cut off all contact. Still, when he saw her at Verlin's Bar and Grill last winter, after they hadn't seen each other in years, she says that Kinder — who is now widely believed to be mounting a challenge to incumbent Governor Jay Nixon, a Democrat — suggested she move into his Brentwood condo.

The condo's $1,555 monthly rent is paid for by Kinder's campaign committee, records show.

Kinder's spokesman, Jay Eastlick, referred all questions to his campaign committee. As of press time, committee spokesman Jared Craighead had not responded to our requests for comment.

Chapman was Penthouse magazine's "pet of the month" in August 1992. In an exclusive interview, she tells Daily RFT that she met Kinder, then a 40-year-old state senator, around 1994, while she was working as an "entertainer" at the Diamond Cabaret in Sauget, Illinois. (The club has since changed its name.) She introduced herself to Kinder by giving him a hug and sitting on his lap; he gave her a business card showing he was a state senator.

"I'm not a political person, so big whoop," Chapman says.

But if she was unimpressed with the politician, he seemed very impressed with her. The never-married Kinder started coming to the club every Monday, and then every Monday and every Wednesday. He showered Chapman with attention, bringing her cookies and brownies and writing her at least a half-dozen letters. And, she says, he continually pestered her to attend functions with him in his hometown of Cape Girardeau. She declined.

But even though she estimates Kinder was spending at least $200 per visit, Chapman eventually cut off contact. "He became very aggressive with me," she says. "I couldn't tolerate what he was making me do."

Chapman alleges that while she gave the state senator private dances, he would grab her by the shoulders and aggressively try to force her head into his lap. "He'd pull me down to his groin — really, really hard, to the point that it hurt me," she says. Alarmed by his conduct and the letters he was writing, she told him not to come in any more. "I was willing to give up the money he gave me," she says simply.

Even then, he'd visit. "He would show up and sit there and just ogle me," Chapman recalls.

Eventually, says Chapman, Kinder gave up. She saw him four years ago at an NRA convention: Their eyes locked, and Chapman confided to a companion that this was the creepy guy she'd told him about. But the two never spoke.

That is, until earlier this year, when Kinder showed up while she was tending bar at Verlin's, a south-city watering hole famous for its "Pantsless Parties," during which bartenders sling drinks while clad only in their underwear. Kinder walked in during the day, and she was fully clothed, Chapman recalls. (She has since left Verlin's.)

Trying to do her job, Chapman asked the 56-year-old Kinder, who was now lieutenant governor and a rising Tea Party star, whether he remembered her. He said he did. They got to chatting, and when she mentioned she was looking to find a new apartment, he pounced.

"I just got a nice place in Brentwood," he said. "You can come live with me."

Records at the Missouri Ethics Commission show that Kinder's campaign began paying rent on a condo at the Villas at Brentwood on March 7 and spent $889 on furniture for the place a week later. (After the St. Louis Post-Dispatch revealed that he'd spent more than $52,000 in taxpayer money at luxury hotels in the St. Louis area, including the Four Seasons and the Chase Park Plaza, Kinder announced that his campaign would be leasing a condo in Richmond Heights for his frequent visits to the city. But the lease was clearly inked at least a month earlier than Kinder's announcement, his campaign finance reports show.)

The bartender didn't take the invitation as a platonic one. "He told me it was a big place, with a couple of bedrooms, and I could have my own — unless I wanted to come snuggle up with him," Chapman says. "It was like going straight back to the past when he'd offer to have me come to events in Cape Girardeau all the time. I declined, declined and declined — every offer he gave me. I only danced with him because he gave me money."

Now 39 years old, Chapman has maintained her lithe figure and dancer's posture. (In person she looks tiny despite her curves, and much younger than in the now-infamous photo circulating through the media.) As a young stripper, she'd chosen not to tell men the truth about her personal life, knowing that if they learned she was gay, it would interfere with her tips. But today she's out and proud of who she is.

So when Kinder made his proposition, she says, she didn't just turn him down — she shot him down. "I said, 'Oh, honey, I don't think my girlfriend would like that!'" He was out of the bar in less than an hour; she hasn't heard from him since.

Chapman says she's speaking out because she's disgusted by Kinder's behavior, both in the mid-'90s and today. "He uses his political business card to get women," she says.

She adds, "He is not fit for public office."  — Sarah Fenske