The Reverend Phillip Duvall announced his resignation from the St. Louis County Justice Services Advisory Board today. He cites "the family," a group of managers and rank-and-file corrections officers, for stifling department reform efforts.

The advisory board was formed in 2019 as a response to inmate deaths in the county jail.

Duvall says that he gives "all the kudos" to Scott Anders, who became acting director of the St. Louis County Department of Justice in January. But Anders is being undermined by senior management, according to Duvall

Duvall says a group of jail employees and managers covers up inmate abuse and is bilking the overtime system for fraudulent pay.

"For example, use-of-force violations that should have been investigated and properly disciplined, those managers that were charged to [investigate] had not done so for years," Duvall says. "There's no accountability, and it promoted a culture of repetitive abuses."

Duvall cited one example of an inmate who was tasered 13 times by jail staff, but the corrections officers responsible have not been properly investigated.

"These bad actors were all in ‘the family,’" Duvall says. "I can show some records where overtime was being given to a select few. We're not talking about a little overtime, we're talking thousands of dollars." 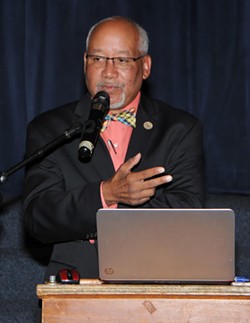 An individual with deep knowledge of the county jail described "the family" as about two dozen jail employees working against reform.

Jeff Smith, the chair of the advisory board from which Duvall is resigning, tells the RFT, "I'm grateful to Rev. Duvall for his tireless service on this board, his advocacy for the least of them, and his friendship. He helped uncover issues in the jail that the current and previous directors have begun to address. We have made significant progress the past year and half toward making the jail safer, healthier, more humane and rehabilitative, but have much more work to do."

Duvall said in a statement announcing his resignation, "I’m honored to have served with my distinguished colleagues … and I wish them continued success."

Duvall has been a civil rights preacher for 30 years and also served in the military. He was an outspoken proponent of reopening the case against police officer Jason Stockley in the death of Anthony Lamar Smith.

His departure from the board is the third in 13 months.

Mary Zabawa Taylor, a former director of patient safety at Washington University School of Medicine, resigned from the board in April 2021. She cited “lack of transparency and communication” from County Executive Sam Page's office.

Twyla Lee, a writer and educator, quit the board earlier this year.

"I tried to hold on as long as I could so that we could get the ship in the dock," Duvall says. "I've had enough."