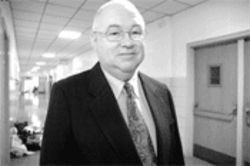 Tom Bauer was recalled from office in 2005.
The Missouri Court of Appeals Eastern District last week reversed a St. Louis jury's verdict in which former St. Louis Alderman Tom Bauer (Ward 24) won a defamation lawsuit against 7-Eleven and one of its franchise owners, Randy Munton.

In a unanimous decision handed down November 27, all three appellate judges ruled that Bauer failed to prove that Munton and 7-Eleven acted with actual malice and that St. Louis Circuit Court Judge Philip Heagney erred when he denied the defendants' motion to dismiss the case during trial this past January.

Despite the legal victory, Munton, who owns the 7-Eleven at the corner of McCausland and Southwest avenues, expressed little relief last week.

"I'm just wondering what Bauer's next course of action will be," said Munton, who has been dealing with the defamation lawsuit since 2005. "I'm quite confident he'll appeal the decision."

Bauer, an attorney who represented himself during the appeal, did not return calls for comment.

The defamation suit stemmed from a successful effort in 2005 to recall Bauer from office after residents and business owners in the ward raised concerns about the alderman's relationship with real estate developers. Bauer took particular exception to a flyer circulated during the recall drive that -- among other things -- stated that he served as executor of an estate that sold property in the ward to a developer for a lower price than was offered from a ward resident who disagreed with Bauer's development plans for the property.