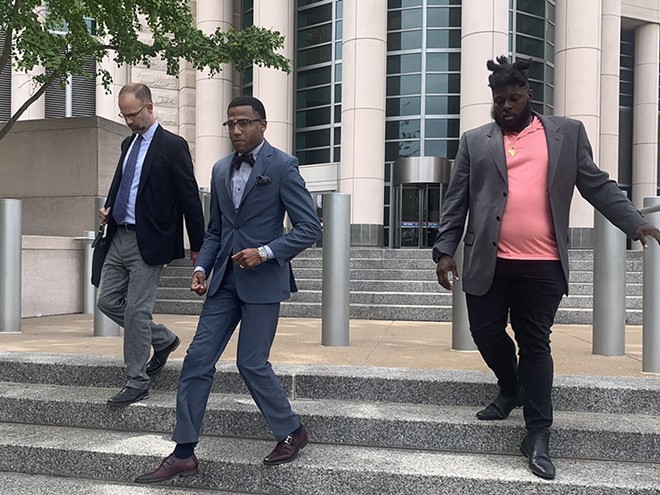 In an impressive display of hubris that would make even Icarus himself blush, disgraced former St. Louis Alderman John Collins-Muhammad is attempting to make the case that, actually, he should be able to keep that bribe money that he received while serving in public office, thank you very much.

According to federal court documents filed this week, Collins-Muhammad's lawyer has argued that the disgraced former lawmaker should not be required to return the $19,500 in ill-gotten funds because they were "an investigative cost." As reported by KSDK, attorney Joseph Flees cited the Victim and Witness Protection Act of 1982 as justification for keeping the cash, saying it “does not authorize courts to order restitution of ‘buy money’ because restitution under the statute is for ‘victims,’ and the government is not a victim when it fronts buy/bribe money or other investigative costs.”

The argument is essentially that since the bribe money was coming from an FBI informant rather than a regular civilian, and since the FBI is part of the government, Collins-Muhammad should just get to keep it. If it feels like there's a scene missing in that tortured logic, that's because it's really just a pretty dumb and illogical case to attempt to make.

Assistant U.S. Attorney Hal Goldsmith responded to the bold play (is "bold" the right word?) in a motion on Wednesday, saying, "What are you stupid? Give the money back lol." Alright not quite, but he did issue a fairly scathing retort: “Defendant has admitted his involvement in the bribery scheme, and his illegal receipt of cash bribes and other things of value totaling approximately $19,500. He simply doesn’t want to pay back the United States for the value of the bribes he received.”

Hilariously,  Goldsmith then insinuated that he thinks Collins-Muhammad should actually have to pay back twice as much as he took.

“This court may consider a fine of up to twice the defendant’s gross gain, or in the instant case, up to $39,000, which is well within the applicable guideline range,” Goldsmith wrote.

To be clear, it's not that Collins-Muhammad is claiming innocence — he did that shit, and has since pleaded guilty, alongside two other former aldermen and one St. Louis County official. He just really wants to keep the money, is all.

Honestly though, who could blame him? I also don't want to pay for my crimes, and in fact I would love to profit from them if at all possible.

Is that really so much to ask?