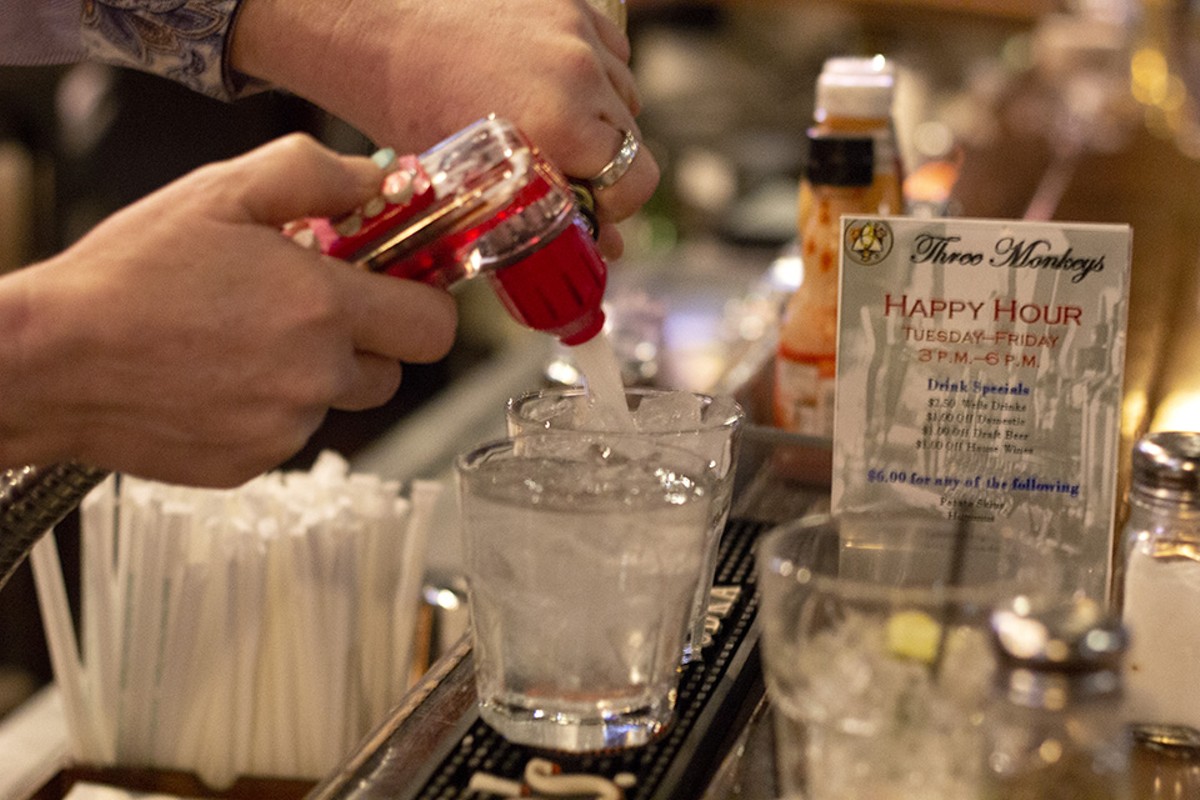 
A dozen young people walk into the Tick Tock at the tail end of a snowstorm, looking for a specific NFL game (we don't play the league) and twelve Vegas Bombs (we typically don't make them, but can). I pull up an app, find a common recipe and locate a key Schnapps under the bar. It's not pretty.

At this, the busiest moment of the evening, a dozen young people drink shots that don't include vodka, but they assume does, saddening every human being involved in the encounter. As they attempt to call up the Cowboys game onto a blank TV screen via their own apps, they comment that the drinks taste a "bit like vanilla." Sigh.

There's no lack of information about what's available to consumers, what the trends are, what you can ask for at a bar. But all rules go out the window when people travel in packs, get set on an idea or have to have what they need or want, no matter the environment.

Doug Morgan, 50, has known a lot of variations on this story. Currently, he's a fill-in bartender at this place and that, but he's logged years behind the bar at some key spots in St. Louis drinking lore: the Hi-Pointe, Riddle's Penultimate, Boogaloo, the Upstairs Lounge and, notably, the Delmar Lounge, where he held an ownership stake.

There, he saw a wave of cocktail culture hit the edge of the U. City Loop. His staff was instructed to make whatever was ordered, even in that wild time between 1:30 and 3 a.m., when the crowd was surging.

"When we started going out," says Morgan, "the choices were shorter and they were the exact same everywhere. Some nicer beers and different cocktails; you might have a nice wine list. It's a 'careful what you ask for' scenario. When I came up in bartending, it was with the birth of the martini thing. We did it at the Delmar, and the Famous Bar did it right behind us. I like making a nice cocktail for someone, maybe something nice to accompany your meal. Now if it's two in the morning and the crowd's five deep and the bartender's really frowning about making fancy martinis ... well, I was adamant about it. No matter what time it was, you serve it. We got over that hump."

The environment today, he says, has become quite a bit more difficult.

He continues. "This happened recently: Somebody asked me the choices of ice cubes. 'I'm sorry, excuse me?' I mean, I get around, and I have yet to go to the place that offers you different ice-cube options."

Morgan has a particular notch on his belt, one that travels with him. It's "the Sandinista," a shot that he and CBGB linchpin Matt Wagner co-created in an early iteration of the Upstairs Lounge. The drink was a variant on Blueberry Hill's spicy version of the Prairie Fire. Morgan and Wagner came upon this recipe: Cuervo, Worcestershire sauce, Rose's lime juice, black pepper and sriracha. The drink caught on around the south side and migrated to different bars, with and without Morgan making them.

In time, it would be seen at bars in New York, and a friend eventually took Morgan to Minneapolis for a round at Grumpy's, a legendary bar that just recently closed to make way for an eight-story apartment tower.

As Morgan recalls it, the arrival of the creator of the Sandinista created a stir at Grumpy's, where the drink was the shot special for metal night. Morgan ended up creating 65 of them on the spot. Got a standing ovation for the trouble.

We don't all get these moments, no matter our age as a bartender. But there's always the next shift, which will differ from the one before it and one after. The thrill is elusive, but it's always out there.