Four Reasons The Rams are Perfect for HBO's Hard Knocks 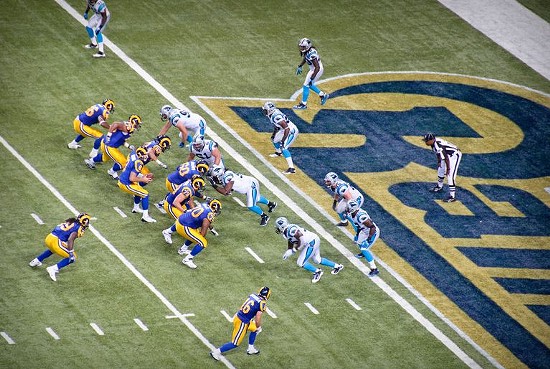 There's little chance HBO's camera crews will set foot inside the Rams' Earth City practice facility this offseason. It's a shame. The 2014 Rams would make the perfect subject for the cable channel's annual documentary series Hard Knocks, a program that stands alone in delivering the kind of access-rich football stories normally stifled by the NFL's image-obsessed coaches and executives.

Head coach Jeff Fisher told the Post-Dispatch Monday it was "probably unlikely" that Hard Knocks would land in St. Louis, but that's ultimately not his call: A 2013 contract between HBO and the NFL means the league can force an eligible team to participate in the show.

Though Oprah's TV network caved to Fisher's pressure and postponed its planned documentary series on Michael Sam, the NFL should ignore Fisher's protests and choose the Rams for Hard Knocks. Here are four reasons why:

See also: This Was the Stupidest Reaction to Michael Sam Getting Drafted on the Entire Internet

1. Suddenly, we care about the Rams.

For those not familiar with the show, Hard Knocks presents an inside look at an NFL training camp. As with the previous eight seasons, the episodes will follow hopeful rookies as they compete for a spot on the final 53-man roster while the veterans and starters try to solidify their own spots. It's like reality TV, but with more hitting, more pressure and no chance of Juan Pablo making an appearance.

Unlike the ultra-managed stagecraft that pervades media coverage on the NFL, the show gives football fans an intimate perspective. Rather than listening to players mumble "I just want to contribute to the team" for the thousandth time during post-game interviews, Hard Knocks focuses on the human moments between the players and coaches. We want to get to know the Rams the way Cincinnati Bengals fans did last season, like when a defensive tackle sang a melancholic rendition of John Mayer's "Gravity" after finding out he'd been cut. We want to see Fisher fire up his players the way New York Jets fans did in 2010, when head coach Rex "Let's eat a goddamn snack" Ryan delivered the single greatest motivational speech in sports history.

The Rams are stuck at the bottom of the hardest division in football. The path to the playoffs this season will go through last year's Super Bowl-winning Seattle Seahawks, the brutally dominant San Francisco 49ers and the scrappy Arizona Cardinals. All had better records last year than the Rams, a team that hasn't sniffed the playoffs since 2004.

However, the upshot is that the Rams are stacked with new talent from multiple high draft picks and headed by a man who knows first-hand how easily coaches can be fired in this league. The pressure will be on during this training camp, where Fisher and his staff will eventually cut the roster from 80 to 90 hopeful players down to the final 53. Hard Knocks excels at revealing the pressure of an NFL training camp, and it would find more than enough dramatic fodder on the Rams.