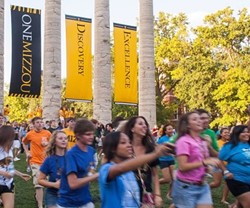 The University of Missouri's respect for a diverse range of religious holidays -- not just the main ones, like Christmas, Thanksgiving and Hanukah -- goes "beyond political correctness." It's "almost like an excuse to do nothing."

So says radio host Tammy Bruce, in an eye-opening Fox News story that goes after Mizzou for maintaining a policy that "lists eight Wiccan and Pagan holidays and events right alongside more mainstream occasions."

Which is, of course, a total outrage that deserves some good old-fashioned journalistic scrutiny.

Here are some excerpts from the Fox News article, published on Monday:

Students at University of Missouri don't need to cram for exams that fall on Wiccan and Pagan holidays, now that the school has put them on par with Christmas, Thanksgiving and Hanukah....

The first holiday on the list is the Hindu two-day festival celebrating the birth of Krishna, a god considered to be a "warrior, hero, teacher and philosopher." During the observance, which occurs on Aug. 28 this year, Hindus are likely to forgo sleep in order to, among other things, sing traditional songs....

For Samhain, listed as a Pagan and Wiccan celebration considered by some to be the Wiccan New Year, general practices include "paying respect to ancestors, family members, elders of the faith, friends, pets and other loved ones" who have died. The holiday coincides with Halloween.

The guide in question, found at diversity.missouri.edu, is provided to faculty, staff and student leaders as a resource for various holy days celebrated at Mizzou.

We first got wind of the Fox News article from the Maneater, the student-run paper at Mizzou, which slams the piece as an insulting attack on the university's policies supporting religious tolerance.

But Fox has a better idea of what the policy truly represents.

It is, as Bruce told them, "indicative of an unbecoming societal shift."

"It almost seems as though we're looking for excuses for people to not have to take their commitments seriously," Bruce said.