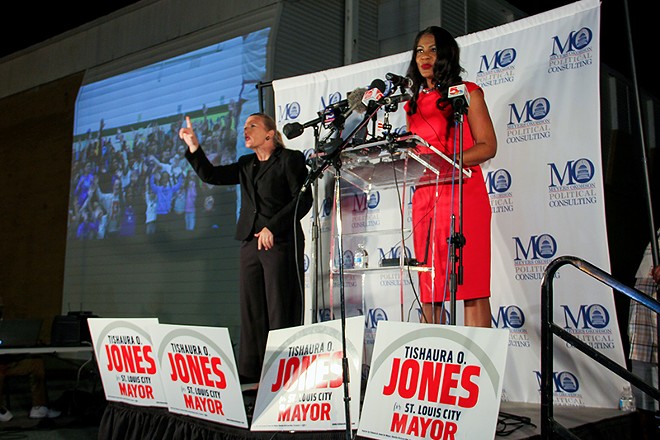 
A version of this story was originally published in the our sister paper Cincinnati CityBeat.

Rivera, who lives in Cleveland, was on the conservative cable channel to discuss Tishaura Jones, who is the first Black woman to be elected mayor in St. Louis. To reduce both crime and police-induced injuries and fatalities, Jones advocates for deterrence policing, in which some offenders are offered social services such as drug rehabilitation, mental health assistance, skills training or education in exchange for certain requirements.

Host Bill Hemmer led Rivera and Leo Terrell, an attorney and Fox News contributor, in a debate about the merits of Jones’ plans.

“You can always use more compassion. The problem in St. Louis as it is here in Cleveland and many of the other ‘top 10 murder cities’ is the drugs, the gangs, the urban violence, the ‘Black-on-Black civil war’ that’s been going on that no one talks about, Black Lives Matter only being focused on Black lives when cops take them,” Rivera said, kicking off the segment with some early dog whistling. “It’s a bad situation. I wish her the best.”

Terrell provided his own thoughts on Jones' policing plan before the conversation shifted to white allyship and Black lived experiences.

And then things got uglier.

Rivera interrupted Terrell with, “Hey Leo, when was the last time you were in the ghetto?”

Terrell, who is Black and had become a supporter of former U.S. President Donald Trump in 2020 after previously being a lifelong Democrat, was outraged that Rivera, who is of Puerto Rican and Russian Jewish descent, would ask that.

Once used by Nazis to force Jewish segregation, “ghetto” became known in later decades as a term for neighborhoods where Black people were “allowed” to live due to redlining and other systemic forms of white supremacy. White people often negatively associate ghettos with both crime and Black people and frequently use the term (and others, such as “inner city” and "Black-on-Black crime") as a racist dog whistle.

Terrell attempted to explain to Hemmer why he was upset, even as Rivera continued to interrupt him.

“Bill… Bill...You know what Geraldo accused me of? He accused me of living in a particular area that I don’t understand,” Terrell told Hemmer before turning his attention back to Rivera. “How dare you? I’ve been a civil rights attorney for 30 years! I have fought against discrimination for 30 years! Check my record out. How dare you!”

Watch the April 8 segment in the tweet below. Rivera asks about the ghetto at the 0:55 mark.

Geraldo Rivera asks Leo Terrell when's the last time he was in the "ghetto" and all hell breaks loose pic.twitter.com/ZdjadawLqM

“Apologize to @TheLeoTerrell did not mean to imply that he doesn't get realities of urban life. Sorry Leo didn't mean it personally. I wish St Louis' new mayor the best. She has her hands full in a city beset by violent crime,” Rivera tweeted.

A little over a day later, he recanted.