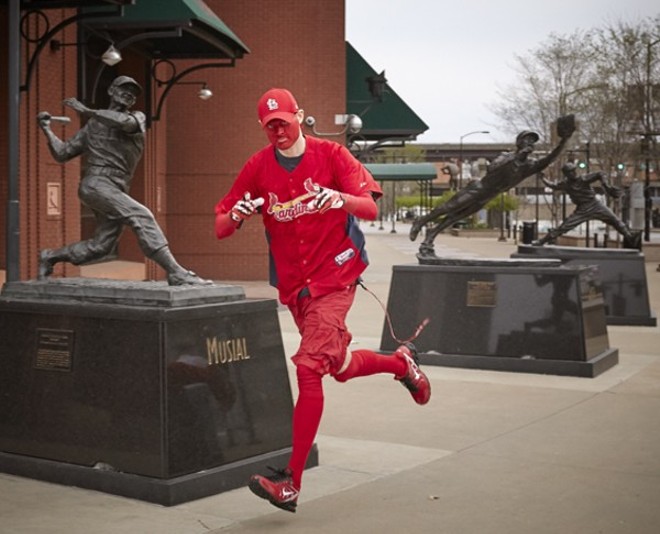 STEVE TRUESDELL
The Rally Runner attended the "Stop the Steal" rally in Washington D.C. on January 6.

St. Louis Cardinals fans know him as the Rally Runner. But viewers of Fox News' Tucker Carlson this week were introduced to the Cardinals superfan — who can be seen running circles around Busch Stadium at game time — as an "agent provocateur" who supposedly helped cause the January 6 riots in the U.S. Capitol.

There are layers of weird here. As revealed Thursday by the Huffington Post, on January 6, the man who dons an all-red outfit for his favorite baseball team swapped his Cardinals hat for a MAGA one: Photos and videos on social media show him participating in the rally, and he described the experience in his own posts. In one Facebook video transcript cited by the Huffington Post, he talked about how he had acquired a riot shield, and, while facing a line of police, "pushed them all the way into the doors."

“I’m right at the front of it and got through those doors into the Capitol, and that’s when reinforcements came,” he told his Facebook audience.

In 2015, the Rally Runner was featured as part of a Riverfront Times cover story about several dedicated Cardinals superfans. Giving his name as "Max Power," the Rally Runner explained that the team's 2011 World Series run had prompted a series of spiritual visions. He explained at the time, "When I run, the Cardinals are better."

But this week, in a December 6 segment of Tucker Carlson's hugely popular show, the Rally Runner was accused by a lawyer representing defendants charged in the January 6 riot of being "clearly a law enforcement officer."

The attorney, Joseph McBride, represents some of the same rioters featured in Carlson's "Patriot Purge" series, which attempts to argue that the people facing charges and prison sentences for their actions on January 6 are innocent because the entire insurrection was actually a "false flag" attack and instigated by undercover law enforcement and FBI.

In this context, Tucker and McBride argue that the fact that some known participants in the day's riots have gone unarrested is proof that they were working undercover to stoke the violence.

Cable news is circling the Rally Runner. Our report sparked by @ryanjreilly's thorough deep dive on the conspiracy that the Cardinals fan is somehow a secret agent sent to set up Trump supporters on 1/6 pic.twitter.com/YMTDHxorDT


In his remarks to Carlson, McBride breathlessly noted that video of the Rally Runner — who was initially labeled by online sleuths as "Redface45" — appeared on video from January 6 "covered in red from head to toe" and that "his face is painted MAGA red."

McBride continued, claiming that the red-faced man had directly supplied weapons to the rioters. Curiously, while conceding the rioters actually used those weapons — including "sledgehammers, poles, mace" —  McBride suggested to Carlson that they did so "for reasons that we cannot comprehend."

In response, Tucker interjected to wonder why face-recognition technology wasn't being used to identify the mastery man in red: "Who is this person? Why hasn't he been charged?"

The question about the Rally Runner's legal status has some merit: The Huffington Post reported that on January 6 he "filmed himself unlawfully ascending the inauguration platform" and posted footage "near the front of the battle at the western entrance to the Capitol, where several police officers were injured."

The problem with Carlson and McBride's theory is that it is complete bullshit: Rally Runner isn't an unknown figure, and any claim that he's an undercover FBI agent or cop has to contend with the fact that literally thousands of people have witnessed (and even high-fived) the local character as he runs laps around a baseball stadium.

This reality appeared to shake even McBride. According to the Huffington Post, when confronted with details about who the Rally Runner actually is, the lawyer initially defended his claim, but eventually "shifted a bit" when presented with more details. According to the report, the lawyer said he was defending his clients and "didn't need to be right," and added, "If I’m wrong, so be it, bro. I don’t care. I don’t give a shit about being wrong."

The irony, of course, is that the Rally Runner clearly believes in the sort of conspiracy theories being spread by the likes of Carlson and McBride. His Facebook page is filled with conspiracy memes and reshares — including those from Carlson's show — claiming the 2020 election was stolen and that the January 6 riots "were setup by evil democrats."

In January, the Rally Runner posted to Facebook that he had been visited by the FBI and police. He said they were only interested in his video footage from January 6, writing, "they see me as a witness."