River Kittens: You'll see more of them in 2016. Steve Truesdell

The Gorge
With the recent signing of both Black Fast and the Lion's Daughter to national labels, many metal fans, musicians and record labels across the nation have zeroed in on St. Louis as fertile ground for the next big names in heavy music. One of the city's best prospects in that arena is the brutally heavy but undeniably cerebral sound of the Gorge, comprised of vocalist/guitarist Phil Ring, guitarist Joe Bowers, drummer Jerry Mazzuca, and bassist Chris Turnbaugh (who recently replaced bassist Ryan Thompson, also of Black Fast). Collectively, the group boasts more than a decade of formal music education and more than three decades of experience as working musicians, facts that serve to shed some light on the intensely intellectual writing and expert execution that characterizes the group's sound.

Throughout 2015, the Gorge performed regularly at rock venues around the city including the Firebird, FUBAR, and the Demo — where they opened for Los Angeles prog-metal band Intronaut. The group is planning a February release for its next album, Thousand Year Fire, followed by supporting tours during the spring and summer. 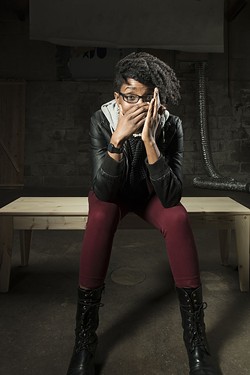 The local-music staple had a huge year in 2015, opening for new-music ensemble Alarm Will Sound, signing with FPE Records, performing at TEDxGateway Arch for the second consecutive year and releasing Loop Talk Vol. 2, among a laundry list of other accomplishments. In addition to new recordings with Whoa Thunder and the Pat Sajak Assassins (she provides bass and vocals, and keys and vocals, respectively), Conaway plans to release two albums in 2016. At least one, she says, will be largely comprised of a cappella compositions from when she was in high school.

Emily Wallace
Winner of this year's RFT Music Award in the "Singer-Songwriter" category, Emily Wallace writes relatable, emotive songs in the country/Americana vein. Aside from her own musical and visual work, Wallace stays busy lending her formidable vocal abilities to a variety of St. Louis acts including Al Holliday and the East Side Rhythm Band, Salisbury, and the Funky Butt Brass Band.

Wallace says she plans to spend the next year continuing to provide backup vocals for Al Holliday and the East Side Rhythm Band and Salisbury, putting more time and energy into cultivating her visual artwork (she designed a T-shirt for honkey-tonkers the Dock Ellis Band), and working on a new album with sister Ali Ruby.

Whoa Thunder
As a member of well-known pop and rock groups Tight Pants Syndrome and Middle Class Fashion, singer, songwriter, videographer and guitarist Brian McClelland is no stranger to St. Louis music fans, largely thanks to ample (and deserved) coverage by the local music media. In addition to his musical ventures, McClelland is the founder of Blip Blap Video, the production company responsible for music videos for local acts Roundheels, Letter to Memphis and Beth Bombara, among others.

In 2015 McClelland's newest project, Whoa Thunder, finally settled on a permanent lineup and took its music on the road, in addition to playing a handful of shows at local venues including Foam, the Heavy Anchor and the Firebird. In the coming year, McClelland plans to release a collaborative song with long-time friend Matt Meyer of local punk group Ded Bugs, as well as recording the band's first full-length with the current lineup.

Whatever your sonic preferences, the St. Louis music scene has artists who can satisfy them. And while all of the musicians and bands we just featured have noteworthy trajectories, they're just a small sampling of what the city has to offer music fans who are willing to seek out and support it.

While love of the music itself animates any musician worthy of the title, at the end of the day, these artists will never be able to achieve their full financial or creative potential without the awareness and support of local music fans like you. So go see a show. Hell, buy the t-shirt while you're there. St. Louis already of has plenty of great musicians making plenty of great music. What the city's music scene needs now is for people like you to show up and support them.