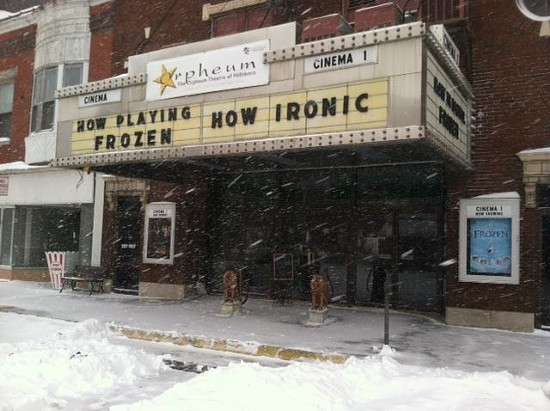 Well, this is a pretty great picture. As the polar vortex froze the Midwest, a Hillsboro, Illinois, movie theater couldn't help but comment when it advertised for the film Frozen on the marquee.

Eisentraut's Orpheum Theatre added a clever, "How ironic," after the title for Frozen and posted the photo on Facebook. There, it was picked up by a blogger on Tumblr, where it went viral and got more than 150,000 shares in one day.

Even Buzzfeed, the Internet's ultimate curator, picked the image up, giving the family-run theater a hearty, "Well played."

See also: Six Insane Things That Happen When It Snows in St. Louis

The Orpheum Theatre has been offering free and reduced price shows for families brave enough to shovel themselves out of their homes and make it for a movie.

And because the world of the Internet is full of grammar Nazis, Daily RFT will make this disclaimer: Unless you're Alanis Morissette, playing the movie Frozen while it's freezing outside isn't technically irony; it's coincidence. Playing Man on Fire or Inferno would be closer to ironic.

That said, we agree with Buzzfeed: Excellent work, Orpheum Theatre.