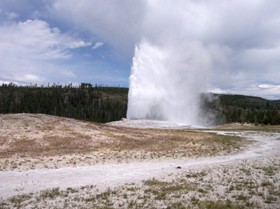 Yellowstone National Park: great for tourists, tough on hitters.
I still haven't gotten my shit together enough (or found the multiple hours necessary), to complete the last part of my draft report for the Cardinals this year. I feel very bad about this state of affairs; I just thought you should all know.
However, despite my inability to get the larger piece done to this point, I would like to take a quick look at one aspect of this draft class for the Cardinals. Or, at least, the very early portions of this draft class.
There are plenty of things teams consider when scouting players for the draft, from physical tools and skills to more nebulous things like makeup and attitude. Hell, even the player's price tag, in the form of a potential signing bonus, is a consideration -- albeit a rather unglamorous one.
One potential consideration you very rarely hear about, though, is environment. No, not the kid's commitment to green energy policies; I care about many things in a baseball player, but his likelihood of buying a Prius tends to be very low on the list. I'm talking about the environment in which he plays his ball. You don't hear about it very often, but it has a huge effect on what the player is actually able to accomplish.
The Cardinals have shown a strong tendency in recent drafts to make park factors at least an implied part of their decision-making process in a major way; I say implied because, like most teams, the Cards tend to be fairly guarded with the exact process they use in these matters. Still, we can glean from what little information does get out, as well as simple deduction based on the players they take, that the Cardinals put a definite emphasis on the environment a given player has performed in.
It's been a consideration for the club all the way back to 2005, when one of the major factors in the Cards drafting Colby Rasmus was a careful measuring of the distances of all Rasmus's home runs, trying to gauge exactly what kind of raw power the club was looking at. After all, the numbers said Colby broke Bo Jackson's state home run record, but how many of those homers were no-doubt blasts and how many just scraped over the wall said as much or more about his power potential than just the raw, non-contextualized number.
Last year, the Cards took Kolten Wong in the first round out of Hawaii, and I wrote at the time about park factor potentially being a huge consideration with the second baseman. His numbers were impressive enough no matter how you slice them, but when you factor in the fact Les Murakami Stadium, where the Rainbow Warriors play their games, is a cavernous graveyard for fly balls, what he accomplished in college took on an added dimension.
With that in mind, I was curious to see how that trend held in this year's draft. I assume it was still a consideration a the very least, but seeing as how Jeff Luhnow has lit out for the pastures of Houston and the Cards had a new scouting director, Dan Kantrovitz, calling the shots this year, it could be that the philosophy has shifted to a certain extent.
I stuck with the first ten rounds. Unfortunately, there really isn't much in the way of reliable park factor information about high schools or junior colleges; at least not widely available, anyhow. Still, there are plenty of picks we can glean information about to paint a picture.
All Park Factor numbers come from Boyd's World, a stunningly, astonishingly useful website that has more data on the college game than you could ever imagine needing. I'll mention schedule-adjusted numbers as well here and there; those numbers come courtesy of collegesplits.com, another website I can't possibly say enough good things about.
Remember: 100 is neutral for a ballpark. Higher numbers favor hitters, lower numbers favor pitchers.
Michael Wacha, RHP, Texas A&M
Park Factor: 108
A fairly moderate park for Wacha, but still one that favors hitters, pushing his numbers in a positive direction when you adjust them. Accounting for park and schedule both, his ERA goes from 2.06 to 1.91 and all his components take a mild step for the better.
James Ramsey, OF, Florida State
Park Factor: 101
Almost exactly neutral, Ramsey gets no real bump from his home park; in fact, he actually takes a slight hit. That's not a bad thing, of course; Ramsey did win an armload of awards this year as one of the best players in all of college baseball thanks to his offensive numbers. The interesting thing to note is that while his home park probably helped his numbers a bit, the tough competition he faced in the ACC probably depressed them slightly. When it's all said and done, the park and schedule adjusted numbers for Ramsey actually improve slightly, from a raw 1.165 OPS to an adjusted 1.233. (!)
Stephen Piscotty, 3B, Stanford
Park Factor: 100
Perfectly neutral park for Piscotty at Stanford. He did face tough competition, getting a very slight bump (his wOBA edges up from .395 to .404), but for the most part Piscotty's numbers are what they are.
Patrick Wisdom, 3B, St. Mary's
Park Factor: 84
Now here's an interesting one. Wisdom was known in college for having plus power; when you consider how tough his home ballpark is on hitters you have to be even more impressed. I wasn't a fan of this pick at the time, but I have to say this makes me look at him in a more positive light. Park and schedule adjusted, Wisdom's numbers take a significant jump, going from a .380 wOBA to a .407.
Tim Cooney, LHP, Wake Forest
Park Factor: 97
A slight pitcher's park hurts Cooney's case, but the strength of competition and some strong hitter's parks in the ACC lead to a decent boost in the schedule adjustment. Park and schedule adjusted, Cooney's ERA for the season goes from 3.82 to 3.45. Not bad.