Funeral Home Director Indicted For Keeping Skeletons In His Closet 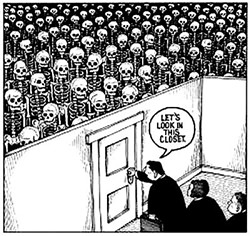 magickriver.blogspot.com
Ever wonder how a family can be sure that the urn full of ashes they received from the mortuary is actually the remains of their loved one and not just something the funeral home director cleaned out of his fireplace?
Well, turns out it's pretty much impossible to tell and, if that family happens to be from Columbia Missouri,  the bodies of their dearly departed may actually have been rotting in a basement or utility closet.
​ Authorities in Boone County Missouri say 77 year-old funeral home director Harold Warren Sr. knowingly handed out urns full of unidentified ashes while several bodies that were supposed to have been cremated were stored--unrefrigerated or embalmed--on the premises of the Warren Funeral Chapels in Columbia and Fulton Missouri.
Warren, a former member on the Columbia city council, was indicted last week by a Boone County jury on three felony counts of unlawful merchandising practices. His son and business partner, Harold Warren Jr., has not been charged in the case. The Kansas City Star has the icky details:

State officials ordered the business to close in July 2008 after a woman's body was found stored in an electrical room, where it had been kept for 10 months without being embalmed or refrigerated. Investigators later found several more decaying bodies.

In July 2009, the Missouri Board of Embalmers and Funeral Directors revoked the men's licenses to practice as funeral directors and embalmers. The elder Warren continues to work at the Columbia funeral home. Its new owner, Reid Millard, hired Warren as a "funeral assistant" to perform physical labor.

One of the mishandled cases was the funeral of Tasha Loggins, 25, who died May 23, 2008. Her mother, Vanae Scott, paid Warren in full for the funeral, and a couple of weeks later he gave her an urn containing ashes he said were those of her daughter.

She kept the ashes in a cherished place in her home until her daughter's body was among several found unrefrigerated in the basement of the Warren chapel.

"It was devastating," Scott said. "For three months I had someone else's ashes."

In an interview this morning, Warren's attorney, Dan Viets, told the Daily RFT that his client will plead not guilty to the charges.
"Harold Warren is a really, highly respected figure in Columbia," Viets said. "He's a great guy. I've known him for 35 years. He's never been the subject of any accusation of wrongdoing of any kind. This whole incident is entirely out of character.That's what's difficult for people outside the Columbia Community to understand. Despite all these allegations Harold still enjoys respect and affection from large part of the Columbia community"
Viets also said that two former customers of the funeral home who were given ashes belonging to someone else have hired lawyers and plan to file civil suits.