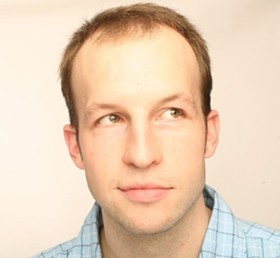 Gabe Kea: "I'm not Canadian, I just do Canadian things."
By the age of four, comic Gabe Kea got his first mention in The New York Times, but the occasion was no joke: His father, Dutch-born Blues defenseman Ed Kea, was being profiled.

In 1983, Kea père had hit his head on the ice during a Blues farm club game. The injury left him with aphasia (i.e., difficulty processing or producing language) and ended his athletic career.

Bolstered by his family and Christian faith, he recovered, but tragedy struck again in 1999 when he drowned accidentally in a lake near his family's summer property in Ontario, Canada.

As for Gabe Kea, he was raised by his mother and grew up with his three siblings in Chesterfield. He attended Westminster Christian Academy, then found his true calling: selling insurance. Realizing that was a horrible false alarm, he stumbled into standup comedy.

He recently moved to Cincinnati, but you can catch him tonight at Brennan's and Monday night at Off Broadway.

Daily RFT: So your father was born in the Netherlands, then grew up in Canada. But you grew up here in St. Louis. So I'm confused. Why do you say "aboot" and "sore-y" and wear Quebec Nordiques shirts on stage? Are you Canadian? What's your deal?

Gabe Kea: No I'm not Canadian. I just do Canadian stuff all the time!

I have one story from when I went to Canada. And it was about how Canadians talk. But in Canada that's what all comedy is. Canadian comedy revolves around America. Yeah, definitely put that in print. We'll start some controversy.

If you don't mind us asking, we're curious: Before your father passed in 1999, to what extent had he recovered from his hockey injury?

He pretty much made full recovery, until he was driving again. I didn't know dad before [his injury]. It seemed like he was normal. But he did get progressively worse as he got older.

Is it something you're asked about when you're doing comedy around here?

You know, it's crazy -- in a podcast, I mentioned my dad 40 minutes in. Then I got a phone call from some guy at USA Hockey Magazine. He wanted to do an article on the relationship I had with my dad and how I got into comedy.

And I was like, "Enh, it doesn't really have anything to do with it." But hey, if it opens me up to a bigger audience.

Oh really? So how did you get into comedy?

I was attracted to it my whole life before that. Then, in late 2002, I hung out at the Funnybone for like a month. And I thought, Man, this is what I gotta do. And I signed up for open mic, I did really well. (Because all my friends were there.)

Then I got into a rhythm. And a few years later, I came in second in a contest at the Funnybone. So they gave me a week of hosting. But I was selling insurance at the time. And that was not a good fit.

Is that why you moved to Cincinnati?

Yeah, I didn't want to go to New York or LA, but mentally, I wanted to move toward doing this as a career. And within two hours of Cincinnati, there's six cities that all have comedy clubs: Dayton, Columbus, Bloomington, Indianapolis, Lexington, Louisville. I'm not booking every week, but last year for my taxes, I figured it was 32 out of 52 weeks.


Your bit about the "Haunted House" [shown above] -- you didn't really subject your nieces to that, did you?

[laughs] No. But see, I say that differently now. Because, I think it was Mike Birbiglia, he  told me, 'If you fake out the audience by telling a story about you doing something, by the time you tell the fifth or sixth one, they're thinking, 'Ahh, he didn't do any of these things.'" So now I just say I thought about doing that. Though my nieces would be down for it.

Got any family coming to see your shows this week?

My mom's coming. She's very strict, and she comes from evangelical background. So I'll end up censoring myself for my mom.

No. She sheltered me when I was growing up. So I've been sheltering her. The set I do when she's there will be the dumbest, hackiest set. And she'll probably say, "Well that was horrible, too."