The Cardinals have had many, many great hitting pitchers in their long and illustrious history. Bob Gibson hit 24 home runs in his career and posted a .751 OPS in 1970. Mark Mulder was a designated hitter during his college career at Michigan State, as was Dan Haren at Pepperdine. Jason Marquis is a former Silver Slugger award winner. Both players in the worst trade the Cardinals have ever made, Rick Wise for Steve Carlton, were very good hitters. So there is plenty of history in the annals of Cardinal baseball regarding pitchers who can handle the bat. 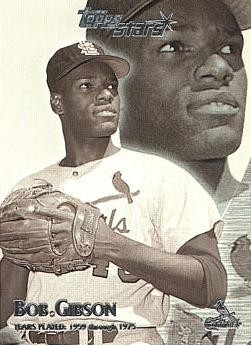 Sorry, Bob. I do believe you were outdone, though.
On the other hand, you have Chris Carpenter. And Chris Carpenter is an awful hitter. Sorry, Chris, them's the breaks. Throwing a baseball, Chris Carpenter is a machine. Hitting a baseball, well, he may still be a machine, but it's more like an Apple II running World of Warcraft.
But when you look up the leaderboard for the most RBIs in a single game by a pitcher in St. Louis Cardinals' history, you will now see Chris Carpenter sitting atop it, with his .105 career batting average and his (now) one career home run. Funny how baseball works sometimes, isn't it?
So does today's offensive explosion ease my concerns about the Cardinals' offense? As a matter of fact, it does not. Not even a little bit. One, when something truly bizarre happens, like oh, say, Chris Carpenter hitting a grand slam and racking up six RBIs in one game, it's tough to consider the results representative, and two, the Cards were facing Kip Wells. We've seen what Kip Wells can do.
So no, I'm not at all soothed by the Cards hanging thirteen on Cincinnati today. On the other hand, I'm certainly not going to complain about it after they managed only three runs in the first two games of the series combined. Any time the Birds can smack a Dusty Baker club around, I'm a happy camper.
-- One thing I have found encouraging in recent games, though, has been the performance of the bullpen. I'm still not completely convinced this relief corps is good enough to take the Cardinals all the way (mostly due to a lack of real strikeout pitchers), I'm also not as worried about it as I was just a few weeks back. Ryan Franklin is still the real wild card here as we head into the postseason, but both Jason Motte and Kyle McClellan have looked better recently than they did for much of the middle portion of the season. Blake Hawksworth continues to pitch well, though someone with a strikeout rate as low as his scares the hell out of me throwing high-leverage innings in the playoffs. (It's the same reason I've never been a huge fan of Franklin, as a matter of fact.) Still, it seems unlikely we'll see the Hawk trying to close games down in October, so I'm not at all concerned with what he has to offer.
-- As much as I love Colby Rasmus -- and trust me, I love Colby Rasmus an awful lot -- I'm beginning to worry about his performance in the playoffs. Colby started off the season a bit slowly, as he generally does, but I wasn't worried. He always starts off slow at a new level, after all. Then came June, and Colby tore the cover off the ball, seemingly vindicating all of us who believed he would come around. Of course, it was certainly worrisome he didn't draw a walk the entire month, but when a guy is swinging the stick the way Colby did in June, maybe aggressiveness isn't the worst thing in the world.
But now, two of the last three months he's been below-average with the bat, and the one he was above-average (August), he was just barely over the line. (103 OPS+) His plate discipline hasn't improved much, as he's walked in less than 6% of his plate appearances in September after being more in the 10% range in both July and August.
I get it's been a tough year for Rasmus. What looked at one point like a slam dunk Rookie of the Year campaign has turned into a real slog at times. He's dealt with a heel issue all season, and a stomach problem that has made a very visible impact on his health. What I'm really hoping for at this point, I suppose, is for Colby to be able to do what Yadier Molina did going into the 2006 postseason. Yadi that year had one of the most offensive offensive campaigns I believe I've ever seen, posting an OPS+ of 53 in 129 games. Yet when the playoffs came, Molina took the opportunity to reset, to wipe the slate clean and not take his brutal season forward with him. Rather than continuing to struggle in attempting to climb out of the hole all at once, Molina took the mindset the playoffs were a brand new season, took a good approach at the plate throughout October, and came out of it a hero.
I hope Colby can do the same. In many ways, I'm sure, this season has been a disappointment for him, at least at times. But he has to find some way to avoid carrying that into the playoffs and start over. And considering he already has two walkoff bombs to his credit in his short career, Colby just might be the type to walk away a hero too.
-- Oh, and by the way, lost in the heroics at the plate perhaps is the fact Chris Carpenter is still fucking good at pitching. The Reds have been hot lately and knocked the Cards' starters around in the first two games pretty good. But Carp didn't care. He just took the mound and did what he always does. Five innings, no runs, three hits, six strikeouts. Yawn.
Chris Carpenter is really, really fucking good. Just wanted to put that out there.