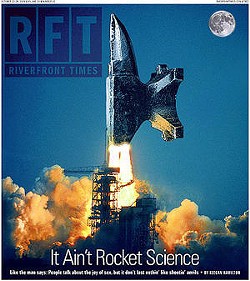 Gay Wilkinson has been a busy man since he and his anvil shooting hobby were the subject of a feature story in a recent Riverfront Times. Not only has the RFT-produced anvil shooting video in which he starred received more than a million views on YouTube, on Monday Wilkinson was profiled on CBS Evening News' "Assignment America" feature.

The segment, titled "Anvil's Away," was filmed last week in Wilkinson's hometown of Farmington, Missouri. Other than misspelling Wilkinson's name in the text-version of the story, at least one obviously staged moment, and the requisite kitschy jokes, correspondent Steve Hartman and his crew did a solid job of encapsulating all the quirks that make Gay one of the most colorful (and hilarious) interviews any reporter will ever encounter.

Watch the video (embedded after the jump) and be sure to stick around until the end when they toss it back to the studio; the look on Katie Couric's face when Hartman tells her she ought to see an anvil shoot is absolutely priceless.

Quoth Wilkinson when he called Daily RFT to report that the segment had recently aired: "I'm world famous!"