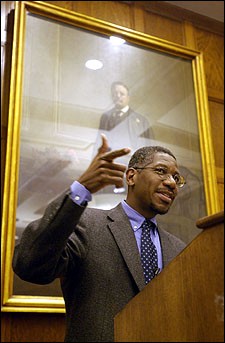 image via
Gerald Early speaks out.

It's been about two weeks since NewSouth Publishing announced its plans for a new version of The Adventures of Huckleberry Finn that replaces the word "nigger" with "slave." There was outrage throughout the land, which was soon replaced by outrage over the "new" zodiac. (Ophiuchus, anyone?) So goes the 24-hour news cycle.

But now Gerald Early, a professor at Washington University and one of the nation's most prominent scholars of African-American studies, has weighed in on the controversy.

Says he (in the Record, Wash. U.'s newspaper for faculty and staff):

We change texts all the time. For instance, we make children's versions of the Bible, Homer and Shakespeare. We have abridged versions of many books for all sorts of reasons. Joel Chandler Harris' Uncle Remus tales have been revised, rewritten, the dialect changed for modern readers.

Such is the case with the new Huck Finn.

People do not have to accept it, and they can show their displeasure by simply not buying and reading this abridgment. Many times abridgments are made that are unwise or unwarranted or unjustified. Sometimes not. Let the public decide in this instance, as it does in all others.