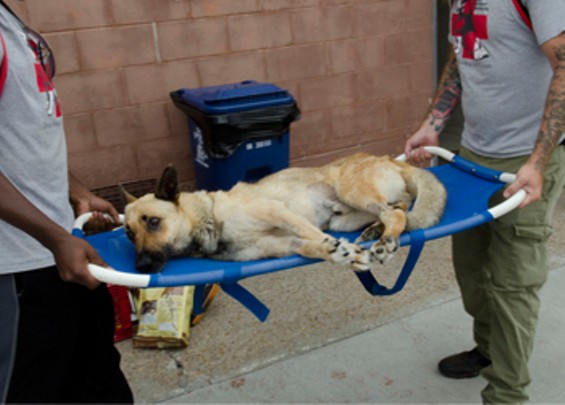 Stray Rescue
Shep gets help after being shot and sodomized.

Randy Grim still remembers when the veterinary neurologist gave him "the look," the one that meant Shep, a German Shepherd, wouldn't survive.

Shep had been sodomized with a tree branch, shot near his spine and left for dead in north St. Louis city. Grim, founder of the animal rescue group Stray Rescue, calls Shep's case "one of the cruelest acts of animal abuse" he's ever seen.

"What makes it so horrible for me is the sodomy," Grimm tells Daily RFT. "All of this is so sick and twisted. It definitely should be a wake-up call to St. Louisans to act, to speak up."

As treatment for Shep's fractures and injuries stalled, the doctor told Grimm it was time to put Shep, who was paralyzed, down for good. But Grimm couldn't help but think of his own dog, OP, who is paralyzed after being shot thirteen times and strangled. If OP could live a happy life with Grimm and his pack, maybe there was a hope for Shep.

"A switch went off in my head," Grimm says. "I was like, 'I can see the spark in his eyes that he doesn't want to be like this. He's not ready to go.' I just felt that. So I just picked him up. I didn't sign discharge papers or anything, I just picked him up and walked out with him."

Stray Rescue
Shep's x-ray showing a bullet by his spine.

Grimm gathered Stray Rescue volunteers and staff and worked out a rehabilitation plan for Shep, including lots of social time with other dogs. After a few months, Shep began walking, then running and even swimming.

"He's not going to run like a greyhound, but he can walk," Grimm says. "We used other dogs to motivate him to walk, and it really worked. He goes on hikes. He even goes swimming in the river."

Now, Shep officially has a forever home, living with two other German Shepherds and Bill Dahlkamp, executive director of Support Dogs, which trains dogs to assist people with disabilities.

"You go through life with so many challenges, and we get down and hard on ourselves," Grimm says, tearing up as he often does when he talks about Shep. "I look at a dog like Shep, and it helped me at least put my life in perspective, what's important, what's not. You can overcome anything -- that's Shep's legacy."

The person who shot and sodomized Shep isn't likely to pay for his or her abuse. Investigators interviewed a person of interest in the case, but no one has been arrested, Grimm says.

"I would like to see justice," says Grimm. "The person that did this is really a sick individual."

Grimm calls the neighborhood around the 4700 block of McMillan Avenue "a tough neighborhood," and says neighbors aren't telling police who abused Shep.

"I definitely think that person could be a real danger to humans," Grimm says of Shep's abuser. "We don't want this in our community."