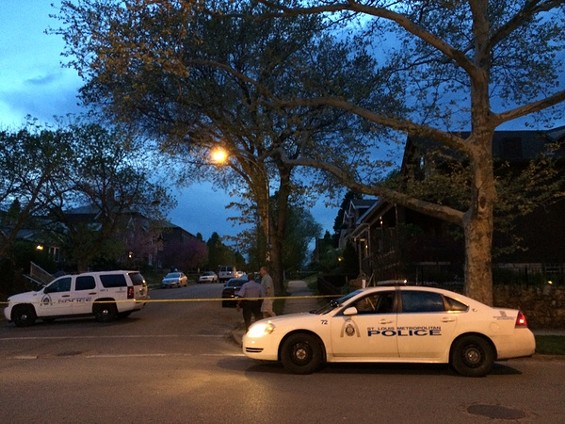 Police are looking for four gunmen after two separate shootings sent four people, including a twelve-year-old girl, to the hospital Saturday night.

The twelve-year-old was inside a house in the 4400 block of St. Ferdinand Avenue where, police say, several people were gathered when three unknown men walked through the vacant lot across the street and started firing into the crowd at 9:15 p.m.

A 39-year-old man retrieved a firearm and shot back, according to the St. Louis Metropolitan Police Department. The shooters fled south through the vacant lot.

The girl was shot in the thigh. She was treated at the hospital and released, police say. A 43-year-old man refused medical attention for a minor graze wound to his right elbow.

Earlier that night, a shooter injured three men -- ages 24, 28 and 30 -- in the neighborhood south of Tower Grove Park. Police say an unknown suspect fired at the men from the gangway, which is a walkway between houses, at the 4100 block of Wyoming Street just before 7:30 p.m.

Police describe the suspect as a black man with dreadlocks in his thirties wearing a white shirt.

Here's the complete report from police:

The victims were in the front of a residence in the above location when an unknown suspect fired shots at them from the gangway. Victim #1 suffered a gunshot wound to the thigh and was conveyed to a local hospital and listed as stable. Victim #2 suffered a gunshot wound to the back and was also listed as stable. Victim #3 responded to a hospital on his own to be treated for a minor injury to his finger. The investigation is ongoing.

Several people were at the above residence when three unknown black male suspects walked through the vacant lot across the street and began firing gunshots at the crowd. Victim #2 retrieved a firearm and returned fire. The suspects fled south through the vacant lot out of sight. Victim #2, who was inside the residence at the time of the incident, sustained a gunshot wound to the thigh. She was conveyed to a hospital where she was treated and released. Victim #3 sustained a minor graze wound to his right elbow and refused medical attention. The investigation is ongoing.