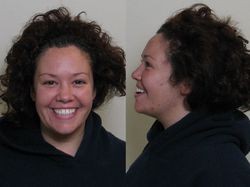 Raschel Hermacinski needs no "say cheese" prompting.
There are many moods one can affect when posing for a police mugshot. That said, most people opt for something implying either disappointment (with themselves) or disbelief (in police accusing them of a crime).
Then there's Raschel Hermacinski of Godrey, Illinois.
When charged last week with felony unlawful use of a credit card, the 25-year-old nearly busted a gut in laughter.
click to enlarge

Sadly her boyfriend, 23-year-old Hunter Beck (right), went for a more traditional mugshot look.
According to the Madison County Sheriff's Office, Hermacinski and Beck made $792 in fraudulent charges on a credit card belonging to one of Beck's family members. The couple was arrested last week at their residence and taken into custody. Bail was set at $15,000 per person.