Send a News Tip
When a chimpanzee once featured in TV commercials mauled a woman last week (February 16) in Connecticut, a Festus man's own experience with chimpanzee attacks came back into the local spotlight. 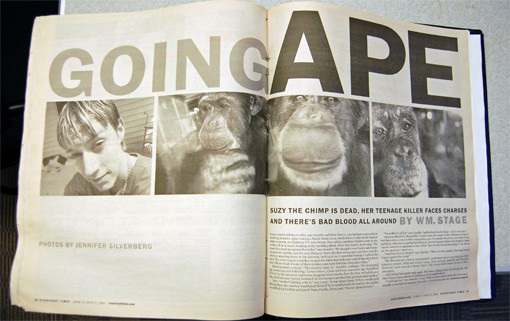 In 2001, Jason Coats, then 18, encountered three chimpanzees that had escaped from an unlocked cage at Chimparty, a facility near his home. He ended up shooting and killing one of the chimps, Suzy, spurring a bitter feud between Coats and Chimparty owners Mike and Connie Casey.

After the jump: an excerpt from an RFT story about the incident: 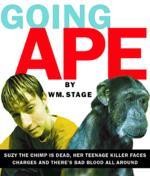 Cover of June 27, 2001 RFT
The day Suzy was shot was "an average day," says Coats. "I wasn't in a bad mood or anything. We had just come from the Dairy Queen -- I work there, got some friends that work there. They gave me some food and a ride home." It was around 6 that evening when the four teens -- Coats, Kenny Wright, Steven Cluff and Amanda McCullough, who was driving -- arrived at Coats' home with music blaring from the Chevy Cavalier. They got a surprise. "We pull in my driveway, and there's monkeys," says Coats. "We were, like, 'Wow! There's monkeys in the driveway!' And one of them came up. He was all wiggling his arms, and it sounds kind of dumb, but his balls were all hanging out and we thought it was funny."

It wasn't funny for long.

It's unclear what set off the chimps. The teens may have teased or taunted the animals, or the chimps may have felt giddy or rambunctious in their state of freedom. Nevertheless, something about the loud music, the car or its occupants really excited the chimps, especially the big male, Coco. "We were laughing at him," says Coats, "and he came up to the window, started banging and screaming and baring his teeth. I don't know, it scared us."

"Here they came at us," [Coats] says excitedly. "We got out of the car, picked up a handful of rocks and tried to get them out of here. The monkeys picked up the rocks and threw them back at us! That blew my mind! I never threw a rock at an animal and then have it thrown back at me." He points to a busted double-pane window on the side of the house. "The big one did that," he notes.

Jason pulled the trigger three times. The first round was birdshot. It hit the 28-year-old, 115-pound Suzy in the back, causing her to lunge forward, toward the drainage ditch. "It let out a monkey screech," recalls Coats. The second and third rounds were slugs, each a single ball of lead. The second shot hit her on the left side, spinning her around. He then chambered the third round. That one, fired when Suzy was lying on the ground, hit her in the face and took her lower jaw.

"It was hurt," offers Coats. "That's why I fired the other rounds. It's never right for an animal to suffer. I asked Connie Casey -- did she want me to take that animal out of its misery?"

You can click here to read the rest of "Going Ape," written by Wm. Stage and published in the June 27, 2001, edition of RFT.

Though clearly a different situation than the attack in Conneticut -- in that situation, an escaped chimp brutally attacked the woman who was visiting the home of a friend -- Coats' story as told by Stage is worth a second look.