Through fogged glasses, the target floating seven yards down the range looked vague, almost ghostly. Muffled under bulbous blue headphones, my ears picked up shallow breath, an accelerated heartbeat and every other audible sign of my apprehension. Staring down eighteen inches of shiny stainless steel, I pulled the hammer back, the cylinder rotated 70 degrees counter-clockwise and a bullet the size of an AA battery slid under the raised firing pin.

Christ, what did I get myself into? 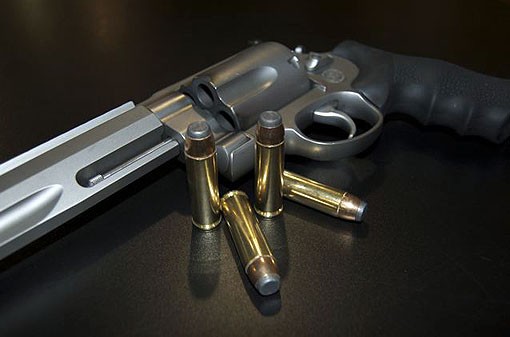 Technically, they're right. Pfeifer, an Austrian manufacturer sells a 13-pound, .600-caliber revolver for $16,000 that fires $40 bullets, but they're not exactly cranking out those impractical behemoths on a regular basis.

Zac Trostel, an employee at Top Gun Shooting Sports in Jefferson County, assured me Smith & Wesson's monster has a purpose.

"It'll put a bear down in one shot," he said. "In Alaska, backpackers carry it as a side-arm to protect themselves from grizzlies. Smith & Wesson says it can take down an elephant."

Trostel then ran down the safety procedures before letting me walk onto the range with the hand-held Dumbo-dropper.

First off, he tells me not to put my hand in front of the cylinder. The force of escaping gas has been shown to break bones. The muzzle heats up lightning fast, so it's best not to grab hold of it. And first-time shooters like me should stagger the rounds, loading every other chamber to avoid accidentally shooting a second time when the gun kicks back (and blowing a nickel-size hole through the range's roof).
"It's always fun to watch people go out and shoot it for the first time," Trostel says.

I guess that explained why I was put in Lane 18, right under the security camera.

Out on the range, anxiety crept in.

Photo: Matt Blickenstaff
A 9mm round next to the .500 magnum.
The ever-popular 9mm, the common round of choice for law enforcement, sports anywhere from a 7.45 to a 9.5 gram (115- to 147-grain) bullet. The ten rounds I purchased for the .500-caliber revolver packed a 26-gram (400-grain) slug. The 9mm travels somewhere around 1,300 feet per second and hits a target with 400 foot-pounds of energy. The .500 Magnum travels 300 feet per second faster, but lands with a staggering 2,290 foot-pounds of bear-stopping force.

The run-up to the trigger pull possessed the same clammy nervousness of a junior-high grope session. You have no idea what you're doing, your hands won't stop shaking, you can never get enough air in your lungs, and it's over before you know it.

The hammer dropped with a resounding whomp and a four-foot column of fire belched out of the muzzle. The barrel, at first parallel to the floor, was sent perpendicular in a millisecond.

I turned around to see a gawking audience forming behind me.

"Its definitely an attention getter," Trostel had warned on my way to the lanes. "It makes such a loud boom that everyone out there comes to that stall to see what's going on."

I sent the next nine rounds screaming down range to a chorus of exclamatory wonderment.