Going the Opposite of Green: Chesterfield Recycling Center That Annoyed Neighbors is Set to Close 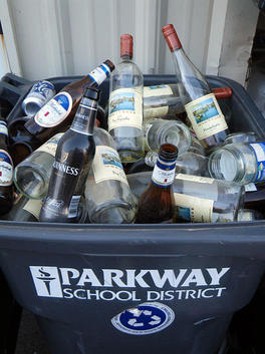 Image courtesy of Margaret Bour
Common Chesterfield recyclables
Last October, the RFT detailed a neighborhood dispute between the Parkway School District and the residents of a white-collar subdivision in Chesterfield.

The school district said it recycled more than 1,300 tons of trash each year, enough to earn several local and national environmental awards.

The facility's neighbors, however, were not at all pleased. They complained about constant racket and worried that industrial waste like battery acid and asbestos was blowing onto their properties.

Less than a year later, Gov. Jay Nixon signed a bill into law that guarantees victory for the whiny neighbors.

On Monday, Nixon added his signature to HB 1692. The law includes a remarkably narrow provision that "prohibits any school district in Chesterfield from operating a materials recovery and recycling facility within 500 feet of a residential property."

According to the Post-Dispatch, after the RFT's story was published last year Parkway made efforts to "curb noise, built visual barriers and cleaned up the recycling site."

The District also noted that that it is "continuing to research options to continue a recycling program."