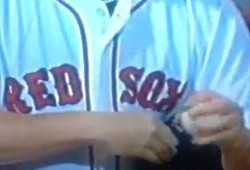 Updated below with response from Lester.

So naturally Lester was cheating, right? So say the armchair conspiracy theorists this morning who swear they saw Lester rub the ball with some kind of goo last night. And like the mystery shooter on the grassy knoll, all the evidence can be found in the following grainy footage of last night's contest:

The clip was enough to convince Tyler Melling, a minor-league pitcher with the Cardinals, that something seemed fishy.

And from there the story has taken on a life of its own, winning the Internet with coverage in Yahoo Sports, Deadspin, Bleacher Report and CBS Sports, to name just a few. 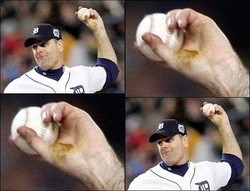 The conspiracy isn't the first time that an opposing pitcher against the Cardinals has been accused of cheating in the World Series. Remember 2006 when Detroit Tigers pitcher Kenny Rogers was suspected of wiping some mysterious substance (perhaps pine tar, perhaps fairy dust) on the ball in Game 2 of the World Series -- the only game Detroit won that year?

But what say you? Was Lester cheating last night, or is Cardinal Nation in desperate need of an excuse? And did Pete Kozma's glove also have WD-40 in it? Does that explain the ball slipping through his glove in two botched plays at short stop?

Lester: 'it was just rosin. All I ever used, all I will use..." About the green; "I don't know what that is. It looks like a giant booger."