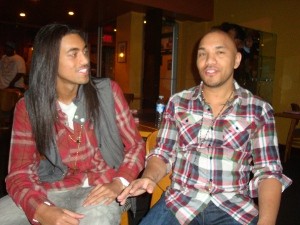 Page, right, talks with his son, the rapper Yung Ro, outside the promotional party for his upcoming album.

In St. Louis, any tattoo with a six-pointed star likely signifies membership with the criminal group Gangster Disciples. Two overlapping circles might mean affiliation with a North City gang called PAC. And if a local kid is tagged with any kind of numeral on his arm ... well let's just say that number doesn't refer to his high school football jersey.

For newly initiated gang members in this city, the first order of business is often a stop at the tattoo parlor to formalize their contract in ink. For lifetime members, such an act presents no problem, but for kids who eventually decide that street life isn't for them, they're suddenly -- and dangerously -- trapped inside their own skin.

Enter Roland Page, the owner of Black Pearl, at 20th and Olive streets, which he claims is the longest-running black-owned tattoo parlor in the city. Beginning this week, he's offering free cover-up of gang tattoos for any troubled kid willing to go through a four-part educational/vocational program supported entirely by volunteers. The initiative, called Operation Mask, officially kicks off tomorrow night, at Innovative Concept Academy. Covering up the tattoos will keep the ex-gang members safe, lower their chances of being profiled by cops and prepare them for interviews with streetwise employers, say organizers.

St. Louis gang culture has changed over the years, says Page. He's seen symbols come and go through his unique perch as a tattoo artist, witnessing the complex narrative of street life through the eye of his needle. "It used to be the Crips against the Bloods, but now it's block versus bock," he says. "Now, sometimes Bloods are fightin' with Bloods. It could be the 4300 block beefin' with the 4400 block."

As gang wars have localized, many of their symbols have turned numerical. When four guys come into Page's shop and ask for the same number, and then two more come in the next day and ask for that number again, he knows something's up.

"You might think it's their mom's birthday, but it's not," he says.

Page was born in Brooklyn and now lives in Soulard. He's not ashamed to lean on the star-power of his son, 18-year-old Roland Jr., better known as Yung Ro, who's risen to national fame as a socially conscious hip-hop artist with a huge following in St. Louis. Last week, father and son threw a joint party at Bar Italia, in the Central West End, to promote Operation Mask, as well as to market Yung Ro's soon-to-be released album, "Ideology of a Trendsetter."

The idea of covering up gang tattoos was actually conceived by Yung Ro, who helps out in his dad's parlor when he's not busy recording. A year ago, Yung Ro was grazed in the head by a stray bullet after a performance at a downtown club. (See him describe it for the RFT here.) It wasn't the first time trouble had followed him to his shows; there have been times when police were forced to shut down some of those gigs prematurely. The teenage impresario realized that a violent fan base didn't make much business sense, so he hatched up the plan for Operation Mask. The initiative fit in neatly with his existing non-profit organization, Runway 2 Empowerment, which focuses on health, education and literacy.

In order to have their tattoos covered up for free, which otherwise could cost $100 or more, participants in the program must attend four one-hour courses at Innovative Concept Academy, in North City, where they'll be taught job-seeking skills like resume writing and prep for the G.E.D. They'll also be offered a field trip to Yung Ro's studio and counseling sessions by Mers Goodwill, according to Alderwoman Marlene Davis, who's backing the project. The program is supported by St. Louis Juvenile Judge Jimmie Edwards, 100 Black Men of St. Louis and Hot104.1.

Page says the program will force one-time rivals to work together, and that's the most important takeaway.

We don't know how much of a showing Operation Mask will get, or how effective it can really be. But Page is trying to help kids by covering up ink that stains. And that's an idea we can get behind.