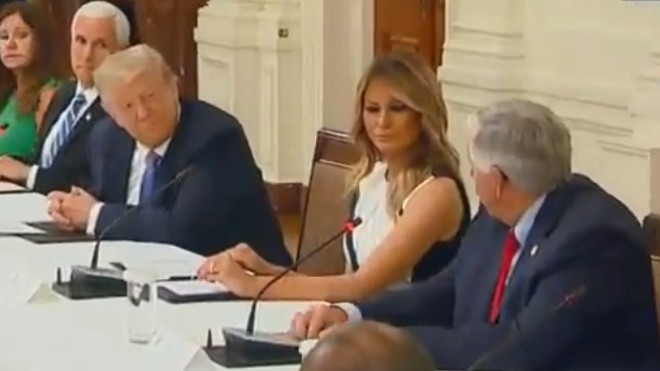 Not only was Missouri Governor Mike Parson slow to shut down the state in response to the pandemic, he also reopened Missouri almost a full month ago — and the number of cases started to grow steadily.

But none of that stopped Governor Parson from congregating with dozens of at-risk Missourians over the weekend.

Parson had already endangered elderly veterans for a photo op back in May, so the no-mask fiesta he had with the Missouri Cattlemen's Association on Saturday shouldn’t have been a surprise.

In pictures he posted to Twitter, Parson is seen in a crowded room full of white hairs who seemed to be completely uninterested in social distancing. And masks? Not a mask in sight, just party guests crammed together shoulder-to-shoulder at dining tables.

There is nothing like being in a room full of cattlemen and women.

These folks know what it means to work hard each and every day to put food on our tables.


Parson didn’t lead by example, either, flashing that stupid mask-less grin while standing right next to attendees.

The governor had just returned from a trip to Washington, D.C., where he got some prime camera time sucking up to Donald Trump while in a meeting about reopening schools.

It's another one of those White House meetings in which Trump encourages everybody to go around the room and praise him. Get a load of this stuff from @GovParsonMO. #DearLeader pic.twitter.com/Ix23MnWkc1


A flushed Parson appeared like a schoolboy with a crush as he stumbled over his words to try to praise Trump starting out with this:

“Thank you Mr. President and you said when you come here, I’m just honored and humbled to be sitting here with you, the vice president, the first lady and the second lady. The dreams you think about someday never imagining them to be a reality but here we are so it’s an honor to be here today.”

Parson goes on to thank Trump for “leading as what good leaders do at times of crisis.”

But if Parson wanted to lead us during this time of crisis, he wouldn’t be dropping into ill-advised parties to breathe all over his septuagenarian constituents.

Maybe he could just check his own Twitter feed for the right moves:

Please continue to be safe, smart, and responsible over the weekend.


Parson isn't the first campaigning conservative to fawn all over Trump in hopes of winning re-election. But the governor's bumbling of the state's response to a deadly virus doesn't seem to be playing out that well for him. U.S. News & World Report noted less than two weeks ago that Parson's gubernatorial peers across the country were getting a polling bump — or at least holding steady — for their work on COVID-19, but he was flailing.

The news site downgraded his chances for re-election — the only sitting governor in the country that it re-classified. And this week, a St. Louis University poll declared the race between Parson and state Auditor Nicole Galloway a “statistical dead heat.”

And while it's hard to figure out how to persuade Parson to take wearing a mask seriously, Galloway may have discovered the best strategy.