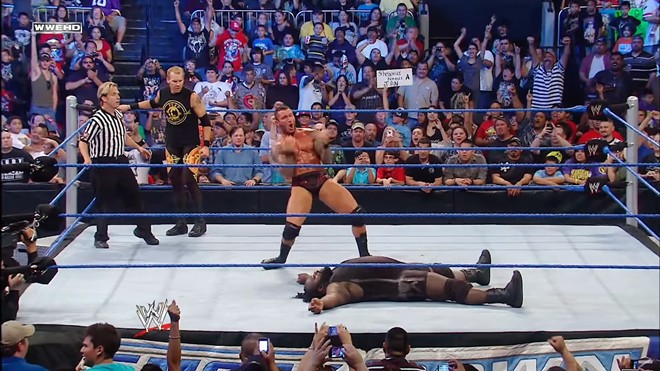 SCREENGRAB
Randy Orton, center standing, was at the middle of litigation over a video game and his tattoos.

Last week a Granite City tattoo artist who inked professional wrestler Randy Orton won her yearslong lawsuit against a video game company over its use of her creative work in three video games.

On Friday, a jury in federal court in southern Illinois awarded artist Catherine Alexander $3,750 after ruling in her favor in her lawsuit against Take-Two Interactive Software, 2K Games and World Wrestling Entertainment. The sum may seem small, but according to numerous art industry publications, the case sets a "fascinating precedent."

According to her suit, Alexander created an "upper back tribal tattoo" on Orton in 2003 and, in 2008, inked a sleeve of "a Bible verse design, a dove, a rose, and skulls" on the professional wrestler.

Orton, 42, got his start in professional wrestling in the St. Louis area in 2000 and eventually went on to become one of the most popular individuals affiliated with the billion-dollar World Wrestling Entertainment media company.

As one of the sport's most popular figures, his likeness — including his tattoos — appeared in numerous video games, such as WWE 2K16, WWE 2K17 and WWE 2K18.

Alexander says in her lawsuit that the WWE offered her $450 for her to allow the tattoos to be used in the video games, but she declined.

She filed her lawsuit in 2018, and for years, it meandered its way through the courts, its progress slowed in part by the pandemic.

The defendants in the case argued that the digital replication of Alexander's work fell under fair use, an aspect of copyright law that allows for the unauthorized use of otherwise protected intellectual property under specific circumstances.

But ultimately the jury disagreed.

Many in the tattoo industry were watching the case with interest because the jury's ruling would set a precedent one way or another. A ruling against Alexander could make it harder for artists who felt their work had been wrongfully recreated in video games to sue for compensation. A ruling for Catherine would have the opposite effect.

According to Video Games Chronicle, "Although the final amount may be considered relatively small, it does set a potential precedent for other tattoo artists to make similar claims if their designs are replicated on athletes in video games."