Let's finish with a few reminiscences of what it was like to grow up here.

A.E. Hotchner's memoir King of the Hill concerns the summer of 1932 when Hotchner, then twelve, was left to fend for himself at the Avalon Hotel at the corner of Kingshighway and Delmar Boulevard when his mother went into the hospital with tuberculosis and his father, a traveling salesman, hit the road to sell watches. It's the most unlikely of subjects, a thrilling tale of survival in the midst of St. Louis. In 1993, it was made into a movie directed by Steven Soderbergh and shot on location. Here's how it begins:

"Last summer really started May 9th, the day they put the lock on 326. You may think May is too early for summer, but let me tell you, not in St. Louis. In geography we studied about the equator running through Africa and all that, but believe me St. Louis is the equator of the U.S.A. The St. Louis sun passes through about three hundred magnifying glasses. You keep a candle on the bureau, and once that St. Louis sun really gets going the wick is right down tickling the bureau top. And that's what it does to your brain. Melts it down, and if the brain had a wick, but July it'd be tickling your eyeballs. The only good thing about the St. Louis sun is when it really gets going it melts the streets and you can just dig a finger in and scoop out a hunk and chew the black tar same as Wrigley's."

The short story writer and novelist Peter Taylor is mostly associated with the Deep South, but he lived in the Central West End for six years, from the time he was nine till he turned fifteen. In one of his best-known stories, "The Little Cousins", he describes what it was like to visit Sportsman's Park in the days when St. Louis had two major league baseball teams. 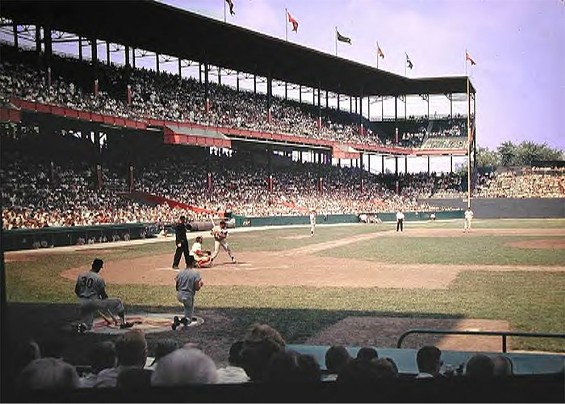 image via
Major league baseball was played at the corner of Grand Avenue and Dodier Street until 1966 when Sportsman's Park was demolished.
"But the grand thing about Corinna was that she could always find the right words for my feelings as well as her own. The outrage I felt, for example, at our being always taken down to Sportsmans' Park to see the Browns play and never the Cardinals left me inarticulate. But Corinna would say for me that it seemed 'such an empty glory' to have box seats at the Browns' games. 'Any fool had rather sit in the bleachers and watch the Cardinals,' she said, 'than have the very best box seats to see a Browns' game.'"

Emily "Mickey" Hahn's family also moved away from St. Louis when she was fifteen. The bitterness of that blow was everlasting.

image via
Hahn (left) and Mr. Mills in Shanghai in the 1930s.
"I had been in high school more than a year when the shock came. We were going to move to Chicago, because my father and his partner thought their business would expand there. It was almost too outrageous to believe. Live in Chicago - that gritty, high-built town? My parents must have gone crazy, I thought, or were in the grip of some higher power than themselves, mysterious and malign. It was incredible that they should want to go. Taught by them, we thought St. Louis was the best city -- with the possible exception of New Orleans, where Daddy had relatives, and Denver, where they'd gone on their honeymoon -- in the States; that Fountain Avenue was the most charming part of St. Louis; that our friends in St. Louis were uniquely wonderful; and that the St. Louis schools were the best to be found anywhere in the world. That my parents should voluntarily give up all this privilege was inconceivable, unless - as I suddenly thought, for the first time, might be possible - they were not, after all, the kindest, wisest people ever born."