DANNY WICENTOWSKI
Greitens may have drawn a modest crowd to his event, but in reality his show was for just one man.

Disgraced former governor and exercise equipment enthusiast Eric Greitens held a political rally in Robertsville on Saturday, meaning that, for a few hours at least, it could reasonably be assumed he wasn’t actively sexually assaulting or blackmailing anyone.

The former chief executive of the state of Missouri, who resigned in 2018 after being accused of doing just that, mostly treated the afternoon event as an audition for an endorsement from former president Donald Trump for U.S. Senator Roy Blunt’s soon-to-be-vacated seat, despite recent reporting that Trump does not support him and is angry that anyone in his orbit does. In keeping, the entire affair amounted to a series of fevered hallucinations plucked straight from the former president’s own addled brain and presented in the direst of terms to a frothing crowd in the serene environs of a Franklin County wedding venue. There were warnings of the imminent destruction of the United States at the hands of the (lol) communists currently occupying the White House, dutiful hand-wringing over nonexistent election fraud and lamentations about the impending ban on the singing of “Amazing Grace” that’s apparently coming down the pike any day now.

But even with the support of suspended attorney and sweat-drenched fountain of bullshit Rudy Giuliani, who also made an appearance at the event, Greitens is unlikely to persuade Trump. According to a Friday report from Politico, our dumbest former president has become increasingly angry that his son's girlfriend and loud-talking nonsense factory Kimberly Guilfoyle is working for Greitens’ campaign and has flat-out said that he would not endorse Greitens if the primary were today.

“Trump thinks Greitens is problematic, and that Kim is annoying,” one Trump adviser told the media outlet, summing up the opinion of millions. “He said, ‘Why the fuck is she working for him?’”

At issue, apparently, is the very scandal that led to Greitens’ resignation from office. It’s become a source of consternation for establishment Republicans throughout the state and nation, who fear that his considerable baggage will cost them what should be a safe seat. Trump’s dissatisfaction probably comes from a different place, though; he tends to be less concerned about sexual abuse and corruption than he is about whether or not someone is a “loser” or a “quitter,” which are labels one can assume he applied to Greitens the second the latter chose to resign instead of attempting to overthrow the state government.

But none of this was of any concern for the 150 or so die-hard Greitens fans in attendance at the Venue at Maison du Lac on Saturday. The small event space was actually the backup plan for the rally, which was originally set to take place outdoors at a nearby ranch but was moved at the last minute due to the weather, sadly depriving us all of the chance to see Giuliani’s hair melt all over his face in the Missouri heat. A woman with a microphone assured the half-full venue that there would have been 600 to 700 attendees were it not for the change, which is confusing since the new location was only a two-minute drive from the original and only has a capacity of 300 anyway. 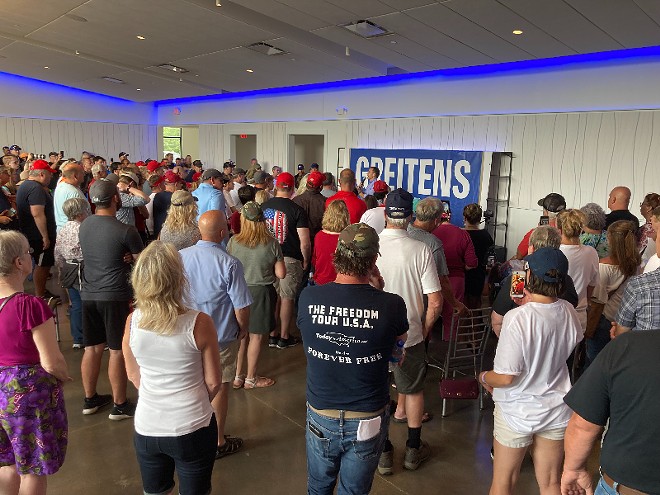 The rally kicked off with a prayer, as tends to be the way with these things. In the style of our lord Jesus Christ, a pastor took the mic and began lamenting the “militant Marxist groups” he claims are bringing “anarchy to our cities,” vowing to “defeat the enemy” with the help of the holy spirit and assuring the crowd that they would “right the election that was wrong” whereupon “the corruption will be exposed.” With the souls of the faithful now nourished by that most pious of prayers, we were then treated to renditions of “Amazing Grace” (take that, libs) and our absolute banger of a national anthem, for which no one dared kneel.

From there it was a seemingly never-ending parade of far-right grifters and charlatans, starting with back-to-back-to-back talk radio hosts including Jamie Allman, who was fired from his gig in April 2018 after saying he was going to shove a hot poker up the ass of one of the kids who had survived the Parkland shooting just two months prior. That was followed up by a former state rep who recited the Declaration of Independence from memory, which appears to be a thing that political types think is fun.

After that a woman screamed at us about abortion for a while, then a former Marine screamed at us about China and the flag and how women can’t fight methed-out ISIS terrorists as well as men and how she is not to be addressed as "sir" because this is not "the transgender military." Most noteworthy at this point was the confusing lack of chairs in the venue, forcing the mostly senior-citizen crowd to stand for hours while having exhausting culture-war talking points barked at them endlessly.

Roughly a thousand speakers later, we finally started getting to the headliners. Former New York City police commissioner and convicted felon Bernard Kerik served mostly as Giuliani’s warm-up act/hype man, speaking gravely about the events of 9/11 and the heroics of the former mayor in a fairly transparent attempt to put those actions at the top of the crowd’s mind instead of the sweaty and unhinged clown antics for which he’s become best-known in recent years. He also credited Giuliani for bringing down rates of violent crime during his tenure, specifically noting the reduction of crime in the city’s Black communities, “where the crime and shootings and death were the highest,” which is less of a dog-whistle than it is a full-on foghorn.

Giuliani took the microphone next, speaking for twenty minutes. Characteristically, he said nothing of value. 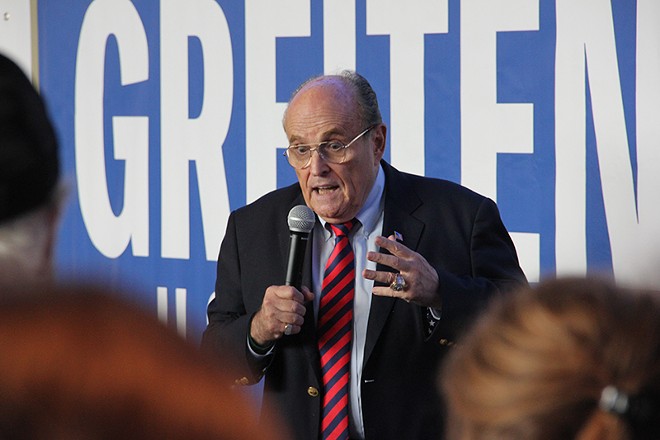 DANNY WICENTOWSKI
Seriously, who cares what this guy has to say?

At long last it was Greitens’ turn to speak, and he emerged holding aloft the still-bleeding head of an antifa militant before tearing off his shirt and scrawling “I WAS A NAVY SEAL” on his chest with blood. OK, maybe not quite that, but he did speak ad nauseum about his military service while bewilderingly claiming to have “defeated antifa when they came to Missouri,” to the cheers of the crowd. He also bafflingly referred to himself as a “political outsider,” seemingly forgetting that he was once the governor of the fucking state.

Aside from that, Greitens’ speech was wall-to-wall cookie-cutter bullshit that could have been recited by any conscienceless political hopeful angling to get into the good graces of the former president, with references to the Arizona “audit”/clown show, the “Russian collusion hoax,” the tech companies “trying to silence Donald Trump” and on and on, all on tap.

Sure, there was a half-full wedding venue full of Missourians cheering as he droned on — and there’s a real chance those people will elect him, despite the hand-wringing of the party establishment, because this state is fucked — but it was crystal clear that Greitens' real audience was just one man, who currently resides at a resort in Florida. If ever there was any doubt, the fact that he said the word “Trump” no less than eight times over the course of his seventeen-minute speech — making for a rate of nearly once per two minutes — should really drive that point home.

There’s one problem though, Eric: He’s just not that into you — and no amount of duct tape is going to fix that.