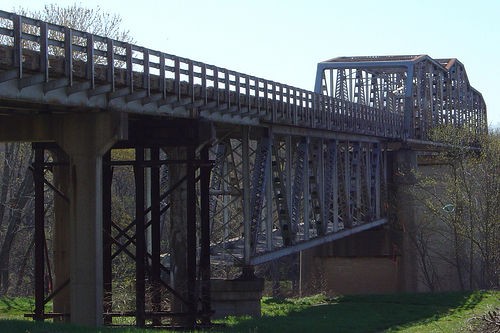 flickr.com/photos/sethgaines
The old Tuscumbia Bridge. She ain't what she used to be. Ain't what she used to be.
In recent weeks a lot of states have gone to extraordinary lengths -- as if a free trip to Disneyland were at stake -- to make the case that they were first to break ground in those so-called "shovel-ready" projects financed by the federal stimulus bill.

Nebraska transportation officials claimed they were first to fix up a rutted roadway. Later California jumped into the act, insisting that their Conservation Corps were at the head of the line. Then along came Maryland, when, according to a New York Times article out today, Rep. Chris Van Hollen boasted that his state's $2.1 million road resurfacing job in Montgomery County was "the first project in the nation approved by the Federal Highway Administration."

But who really holds the title to No. 1 in shovel readiness?


As it turns out, on February 17, the very day President Obama signed the behemoth spending measure into law, work began on a bridge near Tuscumbia, Missouri. "Within a few minutes of President Obama signing the bill, the highway department appoved that project, and construction started on the project," Shane Peck, spokesman for Missouri Department of Transportation, told The Times.

James Beard, a spokesman for the House Committee on Transportation and Infrastructure, is prone to agree. "I think Missouri has the best claim to the title."

So there. Now, which way to Disneyland?