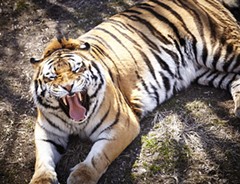 flickr.com/photos/mohistory
The U. City Tiger
For years now, University City has been awash in secrets and lies. It's widely believed that a lion and a lioness guard the west end of the Delmar Loop. The lion is, after all, the city's symbol, and in the interest of gender equality, why not have a lioness there, too? The belief is so ingrained and the cats are so far off the ground that very few people know that the lioness is not actually a lioness at all.

And now a group of concerned U. Citizens who call themselves Tigers for Truth are determined to spread the word.

"We're not. like, angry at people for thinking it's a lioness," says Andrew Wool, the group's mastermind and leader. "Some of our best friends are lions, but that's a tiger."

Wool, you may recall, achieved a certain measure of fame last fall for selling T-shirts emblazoned with the slogan "Sarah Palin: Putting the 'Cunt' back in our Country". But he promises that the Tigers for Truth movement is entirely family-friendly.

The protests began last Saturday, September 12 (incidentally, Wool's 41st birthday), on what was supposed to be the lions' 100th birthday celebration. The celebration was canceled due to lack of funds and interest, but Wool and his group marched anyway from Meshuggah's west to the so-called Lions Gate.

One member, who had once served as his high school's mascot, wore a tiger costume. Wool and three others marched beside him, wearing Tigers for Truth T-shirts and carrying boxes of Frosted Flakes bearing the image of Tony the Tiger. They distributed cereal to passerby, handed out fliers with facts about the U. City statues and tigers in general and collected signatures for a petition that demanded recognition of the tiger. (Signers were required to provide their name, height and favorite color. "It's a joke," Wool explains. "It's not legally binding.")

Although a few people mistook the marchers for supporters of the Mizzou football team and although the group had to make a pit stop at Cicero's for the guy inside the tiger suit to mop himself off ("That thing is hot. He probably lost ten pounds in water weight," Wool estimates), Wool considers the mission a success. "We were having fun," he says.