Guesstimate: One in Four Missouri Legislators Armed and Ludicrous 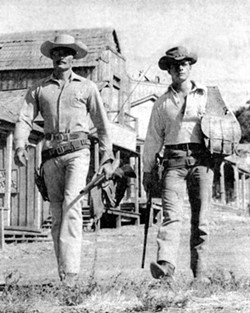 Currently, only state senators and representatives are allowed to carry concealed weapons inside the capitol building. State Representative Jeanie Riddle (R - Mokane) wants to change that. She's sponsoring a bill (HB 778) that would allow legislative aides and other state elected officials to take carry their "peacemakers" with them when they attend hearings and other meetings inside the capitol rotunda. The bill reportedly has 61 co-sponsors -- all of them Republican.

Yesterday Riddle would not comment on whether or not she had a pistol in her purse.

"Loose lips sinks ships," she told the Columbia Tribune. State Senator Brian Nieves (R - Washington) is less coy, telling a reporter last year that, "On any given day, 97 percent of the time, Brian Nieves is carrying a gun."

"It is all for show," said Kelly of the bill. "It is so they can make it clear. It is all political."

Kelly added that he frequently goes camping in the wilds of Missouri without a gun and doesn't think that lethal weapons are necessary in the Capitol, either.

Riddle is also sponsoring legislation that would allow lower the age requirement -- from 23 to 21 years old -- for people eligible to carry a concealed weapon.