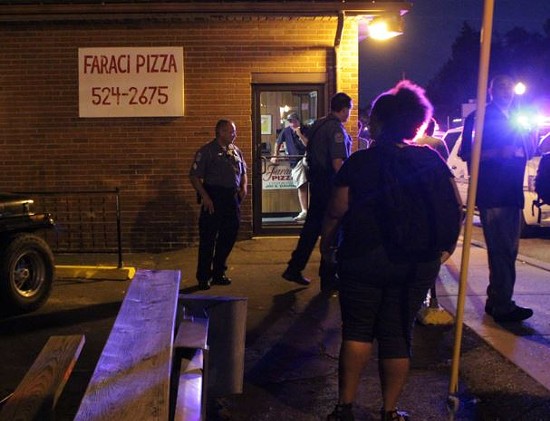 Danny Wicentowski
Protesters claim the owner of Faraci Pizza pointed a gun at them Thursday night, but the restaurant owner's wife says that's a lie.

When Daily RFT arrived at Faraci Pizza around 6:30 p.m. Saturday, the pizza joint was being guarded by two police cruisers and officers near the door. Protesters chanted about "racist pizza" and demanded the officers investigate Jim Marshall, the eatery's owner. Many protesters claimed Marshall had pulled a gun on a group of non-violent demonstrators on Thursday night.

But Marshall's wife, Dawne, tells Daily RFT the protesters have it all wrong: She says her husband was afraid for his safety, so he cocked a pistol and placed it in his pocket while inside the store. She says he never aimed the weapon at anybody. She also says their business has endured days of harassment over a "lie that went wildfire" on social media.

Here's a (very small) sampling of what's being said about Faraci Pizza on Twitter.

People are protesting Faraci Pizza because on Thursday someone at Faraci's Pizza, an employee, pulled a gun on protesters

We interviewed Dawne Marshall Sunday night. A few hours before she'd discovered three scorched patches of sidewalk and broken glass outside the store, the result of what she believes were Molotov cocktails that rolled off the restaurant's sloped roof. (See update and police report on next page.)

She said her husband was still "too upset" to talk about the Thursday incident. The problems began that night when a large group of protesters marched on the street outside the store while shouting things like "Hands up, don't shoot!"

Dawne said her husband confronted the protesters after hearing them chant, "Shut it down!"

"So they were purposely trying to shut down businesses," she said. "When they got down here in front of our place, my husband told them they need to get out of the street, quit trying to block businesses. Well, they started surrounding him. I'm sure there were cuss words thrown back and forth, and when we finally got my husband back in here they were all at my windows, pointing at my husband and saying, 'We're going to get you.'"

"So," she continued, "he went over and grabbed a handgun. He cocked it, but he put it in his pocket."

Dawne said her husband didn't venture back outside that night, and did not point his handgun at anyone. After police arrived and the crowd dispersed, they drove home, she said.

But protesters claim they saw Jim Marshall pocket the gun. A live-streamed video from that night shows police responding to a disturbance at the restaurant while people surround store.

At the 1:25 mark the video shows Jim Marshall putting something in his left pocket, and someone yells, "He got a gun!"

However, Daily RFT has not yet seen photos or videos that actually show Jim Marshall brandishing a gun anywhere outside Faraci Pizza. There's also some inconsistency among the protesters' accounts of the incident; some told us he came out to the street holding a shotgun, while others said he was holding a pistol.

In any case, the video and resulting social media explosion turned Faraci Pizza into a target. On Saturday the restaurant received a flood of fake pizza orders over the phone. Dawne eventually took the phone off the hook, but she said her "good customers" showed up to demonstrate their support for the restaurant.

One of those customers, however, arrived with an "I am Darren Wilson" sign, which nearly started a brawl between him and a group of protesters gathered near the front door.

Continue for photos and video of the showdown at Faraci Pizza between a Darren Wilson supporter and Ferguson protesters.